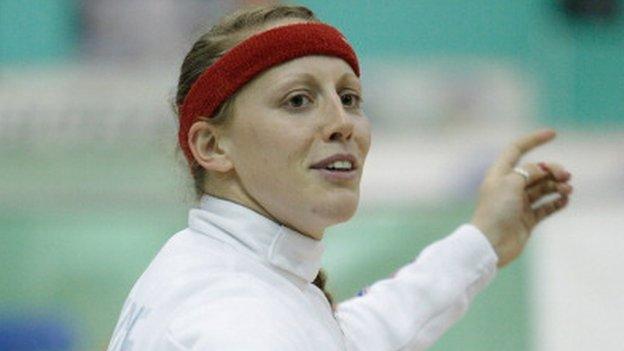 Britain's Mhairi Spence won silver at the first modern pentathlon World Cup of 2012 to strengthen her credentials in the battle for selection to Team GB.

Spence, 26, led heading into the run-shoot finale in the American city of Charlotte, but was passed by Olympic champion Lena Schoneborn of Germany.

"A lot of people back home believe in me," said Spence, "and today was the day to show them they're right."

Britain can send a maximum of two women to London 2012 but six pentathletes are in contention for those places.

Three of those - Spence, Murray and Fell - competed in Saturday's final in Charlotte, while Freyja Prentice failed to progress from qualifying on Thursday.

Despite that, 21-year-old Prentice leads the race to be selected to the British team having reached the Olympic qualifying standard at last year's European Championships.

Results at the first four World Cups of the year will determine which Britons are sent to May's World Cup Final, in China, and the World Championships in Rome. Both of those events are vital to securing nomination to Team GB.

Second place in the US hands Spence, who similarly won World Cup silver in Palm Springs last year, an early advantage over her rivals.

I'm aiming for a medal at Worlds and Olympics, same as everyone else

I've worked very hard to be a better athlete, and I'm happy I held it together all day.

"We're pushing each other forward. Over the winter we've all raised our game and whoever makes it to the Games [for Britain] is going to put on a very good performance.

"I won silver in Palm Springs last year and I needed to win a medal here to keep my ranking up there in case it comes down to that. But I'm aiming for a medal at Worlds and Olympics, same as everyone else."

Pentathlon's five-event test begins with fencing, followed by swimming and showjumping. It concludes in a new-look combination of running and laser pistol shooting introduced after the Beijing Games, where Fell won Olympic silver behind Schoneborn.

At London 2012, the women's modern pentathlon will form the last Olympic medal event of the Games.

Katy Burke and Katy Livingston are the remaining two pentathletes vying for selection to the British women's team, and both will be given the chance to compete at World Cups later this season.

Nick Woodbridge finished sixth for Britain in Sunday's men's final, but GB team-mate Jamie Cooke finished last after struggling in both his fencing and showjumping.

"Finishing sixth is a great result and strong indicator of what could be achieved in the visible future," said performance director Jan Bartu of Woodbridge's race.

"It was a very frustrating day for Jamie," he added. "Jamie struggled from the start feeling a lot of pressure on his shoulders. He finished at the bottom of the fencing sheet and an unlucky draw in the riding did not help."