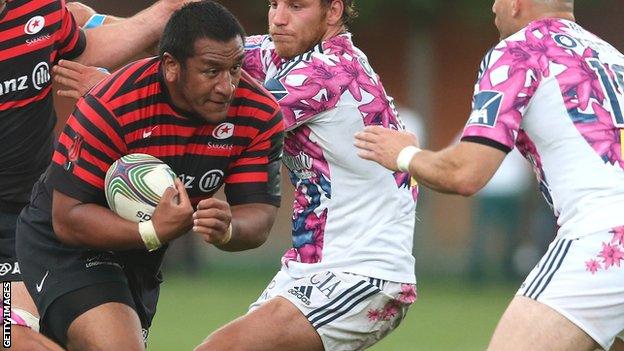 Uncapped Saracens prop Mako Vunipola, 21, has been named in England's squad for the autumn internationals.

He joins the 32-man squad alongside the uncapped Tom Youngs and recalled Ugo Monye and James Haskell.

Tom Wood and Courtney Lawes both return after missing the South African tour in the summer through injury.

Boss Stuart Lancaster has opted not to select any France-based players in his 32-man squad for the four Tests, which begin against Fiji on 10 November.

"It's great to be able to give Mako a chance in the squad. He has come through our age grade sides and made a real impact at Saracens," said Lancaster.

"Likewise Tom Youngs, who was with us on tour in South Africa, and we know what James Haskell and Ugo Monye are capable of if they get their opportunity."

The England head coach was forced into changes by injuries to Ben Foden, Tom Croft, Alex Corbisiero and Rob Webber, and the retirement of Charlie Hodgson, Matt Stevens and Lee Mears.

New Zealand-born Vunipola, whose father Fe'ao played for Tonga at the 1995 and 1999 World Cups, takes the place of loose-head Corbisiero in the squad.

Vunipola has represented England at Under-18 and Under-20 level and has a younger brother, Billy, who plays for Wasps.

Mako's call-up also raises the prospect that he could one day come up against his Welsh international back-row cousin, Tongan-born Toby Faletau.

Monye won the last of his 13 England caps against Scotland in March 2010 but was part of last summer's tour to South Africa.

However, hamstring injuries kept him out of the first two Tests before he was knocked unconscious in the tour's final midweek game, against the South African Barbarians.

The 29-year-old, a British and Irish Lion in 2009, was subsequently left out of the elite player squad but has made a good start to the season, scoring four tries for Harlequins.

Who is Mako Vunipola?

Haskell was also part of England's squad in South Africa, having spent time playing in Japan and New Zealand.

Uncapped Leicester hooker Youngs, 25, is the older brother of England scrum-half Ben and takes over from Webber, who is recovering from a shoulder problem, as cover for Northampton's Dylan Hartley.

Meanwhile, England will name their captain for the November internationals on Tuesday.

Harlequins flanker Chris Robshaw captained the side in the Six Nations and during the June tour of South Africa.

The 32-man squad will gather for a training camp at St George's Park, Burton, on Sunday night.