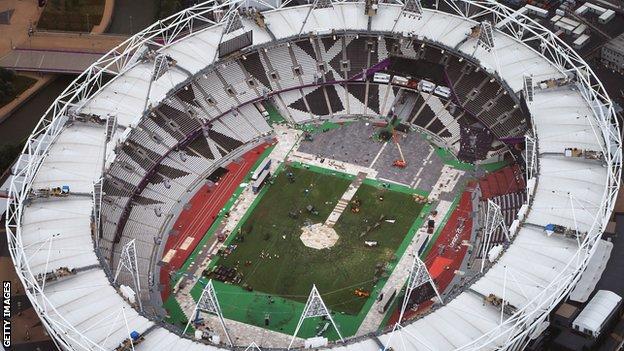 Retractable seating is key to the Olympic Stadium's success, according to UK Athletics chairman Ed Warner.

West Ham United were named on Wednesday as preferred bidders to become the stadium's main tenant.

Warner says retractable seating will mean "a stadium that can be used 52 weeks a year" between football, athletics and entertainment events.

He said the seating would "be very commercially viable for West Ham and the other users".

But Warner, who previously branded the planned timescale to reopen the Olympic stadium between 2015 and 2016 "a farce", admits there is frustration for athletics surrounding the delay.

"They say the stadium will reopen in August 2015 at the earliest, which is a frustration for athletics because it takes out the summer 2015 season," he said.

"I guess that means West Ham could be there for the 2015-16 season - but that all requires planning permission, commercial agreements being put in place, it going out to tender and it being built on time.

"Let's hope it can get open for then because they could possibly use it for a match at the Rugby World Cup, and that would open it up for the 2016 summer athletics season, and we're desperate to get in there."

Although work on transforming the Olympic Stadium into a multi-sports venue is not scheduled to begin until next autumn, it has been suggested London's 2013 Diamond League meeting may be held at the venue, with the one-year anniversary of the London 2012 opening ceremony falling on day two of the meet.

With so much public money invested in the stadium - first to build it and now to convert it for top-flight football - Johnson is concerned that the taxpayer could be left out of pocket if the duo later decided to sell the club on.

Adding retractable seating and fully extending the roof on the venue will cost between £130m and £150m, on top of the £429m it cost to build the stadium for the Games. The vast majority of that conversion money will come from a mix of public funding, including a £40m loan from Newham Council, the local authority.

For some time, there has been concern over a shortfall in the funding, especially with West Ham only willing to commit around £15m, but sources tell me that is now less of a problem.

But when building work does begin, Warner - who became the inaugural chairman of UK Athletics in January 2007 - says the installation of retractable seating "allows us to use the stadium for all the athletics we need each summer, big rock concerts, and for a full football season".

He added all levels of athletics would benefit from the year-round use, "whether you're a school kid, a masters, a Paralympic athlete [or] an elite Olympic athlete".

"At whatever level, you get a chance to compete in that stadium each year," Warner told BBC Sportsweek.

Other bids for the stadium's future use had been made by League One side Leyton Orient, UCFB College of Football Business and a consortium linked to Formula 1.

And Warner sees no negatives for athletics with West Ham potentially moving to the stadium - as long as retractable seating is implemented.

"Retractable seats can be moved very quickly in a matter of days, over the track and back again," he added.

"If that can be put together, we will get a stadium that can be used 52 weeks a year and can be very commercially viable for West Ham and other users."

Warner also admitted athletics alone could not help sustain the stadium, though he is keen for the sport to play an important part.

"We have lobbied vociferously for the athletics track and for use of the stadium," he said.

"The difficulty we have is it's a very short window each summer when the best athletes peak, and what we don't want to do is be accused for the next 99 years of being a burden on the public purse.

"The solution we have come up with allows the stadium to be used all year round and allows us to get the right athletics in there."

He also noted the lack of foresight has caused problems for the Olympic Stadium.

"If they designed in retractable seats from the start, we wouldn't be where we are now," he said.

The delays have seen costs rise on a stadium which cost £431m to build, with the funding provision largely remaining the same.

Warner also admitted the delay was partly due to the legal bids of Tottenham Hotspur and Leyton Orient surrounding the take over of the Olympic Stadium.