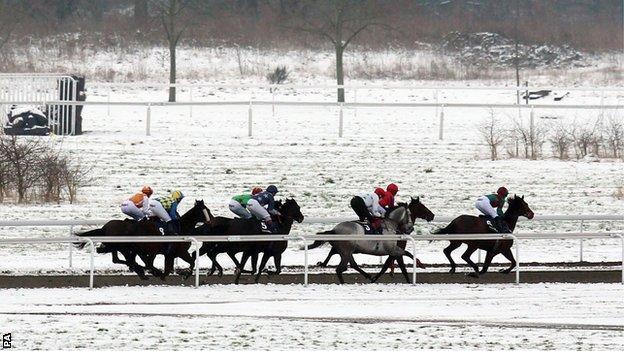 Snow and freezing conditions have continued to play havoc with the weekend's sporting schedule, with racing postponed on Sunday.

The meeting at Kempton has been called off because of snow after officials had earlier given it the go-ahead.

The Scottish Premier League match at Motherwell and the Scottish Third Division match at Peterhead, however, have both beaten the weather.

Ascot's meeting on Saturday, in which Sprinter Sacre was set to run in the Victor Chandler Chase, had to be abandoned because of the bad weather.

Snow was forecast for large parts of the UK, with the Met Office issuing several weather warnings over the weekend.

In the Football League, 14 matches were called off, eight of those in League Two.

Race meetings for next week have also been affected with Leicester on Tuesday off, and planned fixtures at Wetherby and Catterick during the middle of next week among those already in doubt. Course inspections are due at Kempton and Wolverhampton on Monday.