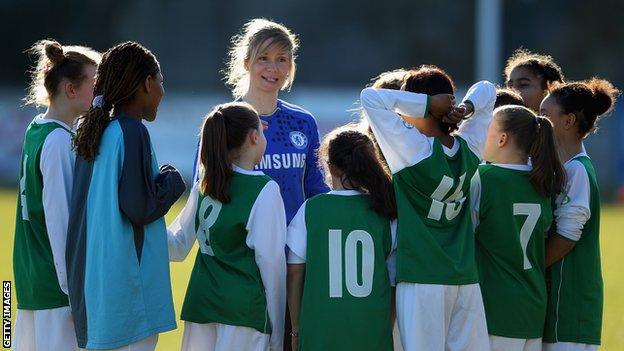 The government is preparing to make a major announcement on new funding for school sport in the next few days, the BBC has learned.

A new strategy for school sport has been debated within Whitehall for months. While the precise details remain shrouded in secrecy, I'm told the amount of money involved is "significant".

Between £100m and £150m could be committed by the Department for Education in a bid to help primary schools improve the quality of their sports provision.

That could mean schools each receive thousands of pounds of ring-fenced funding that must be spent on sport, with the various sporting governing bodies encouraged to help provide expertise and coaches to work alongside teachers.

I understand the Football Association, England and Wales Cricket Board, Lawn Tennis Association and other organisations are being briefed on the plans on Thursday by the government. An announcement is being planned for this week, with plans overseen by No 10 Downing Street. The Premier League is also in discussions with the government over how its club community projects might be used as a delivery vehicle for the new policy.

The new funding comes after widespread calls for more investment in school sport to help build on the legacy potential of the 2012 London Olympics and Paralympics.

Despite record investment in elite and community sport in the last six months, the government has also been criticised for making cuts in schools sports and failing to devise a national strategy for this level of sport.

In 2010, £162m of ring-fenced funding for the national School Sport Partnerships (SSPs) was abolished by Education Secretary Michael Gove, a decision that provoked an outcry.

The network enabled well-equipped 'hub' secondary schools to lend PE teachers to others that needed them, especially primary schools.

Following protests, £65m was reinstated, allowing the programme to run partially under a different guise. But that is due to cease before the start of the next academic year in September 2013.

A recommendation for two hours of PE in schools each week has also been abandoned, something which the opposition wants reversed.

Crucially, the new policy will not be a reinstatement of the SSP infrastructure, with Gove insisting that money goes directly to schools without it being spent on any additional levels of administration.

A number of projects have been established by governing bodies and professional clubs in recent years that focus on coaching teachers in PE and sport. The LTA claims to have trained 26,000 teachers as part of its Aegon Schools Programme. The Manchester United Foundation's "Hub of the Community" scheme has seen academy coaches based permanently at eight secondary schools in the north west.

Now, eight months after the Olympics, the Prime Minister will announce that the Government's new strategy could replicate projects like these nationally.

Last month, a four-year long Ofsted report concluded there was not enough strenuous physical activity in many of England's school PE lessons, with teachers tending to lack specialist training and a minority of schools playing competitive sport at a high level.

The report said PE teaching was good or outstanding in two-thirds of the primary schools it visited, an improvement on the results of its last survey in 2008, but it put much of this down to the SSP programme, saying its impact in "maximising participation and increasing competition was clearly evident in the vast majority of schools visited".

Ofsted warned that sustaining this level of improvement would be challenging against the "backdrop of greater expectations following last summer's London Games", and called for a new national strategy building on the success of SSPs.

There have been repeated calls from the Sport and Recreation Alliance and the Youth Sport Trust for every primary school to have a specialist PE teacher.

The government says its draft PE curriculum will put competitive sport back at the heart of school life but has been accused of failing to grasp the fundamental issue of a lack of basic physical literacy at primary school level.

With the help of the prime minister's legacy advisor and London 2012 chairman, Lord Coe, a new strategy announcement was originally intended to be made before Christmas.

However, amid reports of disagreements between the Departments of Education and Health, it was delayed.