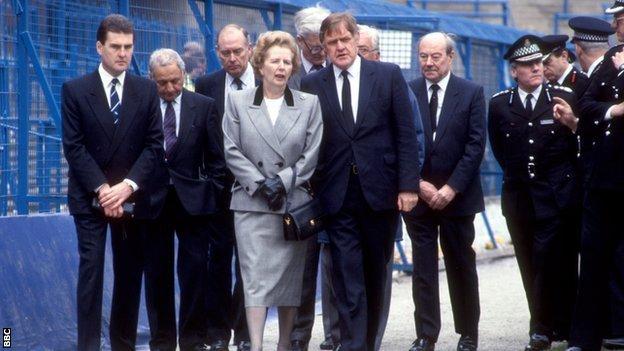 For a Prime Minister who, in her successor John Major's words, "looked rather out of place" at sport, Baroness Thatcher certainly left a lasting impression.

Nowhere more so than in football, where the decision not to order clubs to observe a minute's silence in the coming days will be well received by some fans who remember the deeply troubled times she presided over.

Football came to reflect the social upheaval of the Thatcher years.

Overshadowed by hooliganism, watching the game was often a frightening and unpleasant experience. Grounds were falling apart and the sport was in desperate need of investment.

Only after a series of tragedies did the authorities act.

The Bradford City fire of 1985 led to the deaths of 56 people and highlighted the deadly neglect of English stadiums.

It was followed just two weeks later by the Heysel tragedy which left 39 fans dead, crushed by a collapsing wall.

Rioting Liverpool supporters were blamed and English clubs were banned from Europe, a stance fully supported by Thatcher.

She saw football's problems as a social order issue to be cracked down on but chose to ignore the woeful facilities, security and policing which had also played their part.

Many believe it was her disdain for football supporters which shaped her reaction to the Hillsborough disaster four years later, when 96 Liverpool fans died.

The Thatcher government responded by introducing compulsory identity cards through the Football Spectators' Act of 1989, a hated policy which was never implemented, although the Act has mutated into a more effective piece of legislation subjecting trouble makers to banning orders.

1970 - Made minister for education

1992 - Stands down as MP and accepts peerage

The Prime Minister David Cameron apologised last year for the failures that caused Hillsborough and the police's cynical policy of blaming Liverpool fans for causing the crush.

But families of the victims remain convinced that Thatcher played a more direct part in the cover up.

Margaret Aspinall, whose son James died in the tragedy, said she now hoped the truth about Thatcher's role would come out.

She said: "I don't know whether there is any more but if there is, now Margaret Thatcher is dead, this is the time to hand it over. She was there, she was part of it. All we want is the truth."

Aspinall added: "She presided over very dark days for football.

"Nowadays people going to matches are treated as human beings. But Margaret Thatcher had absolutely no feelings for football fans, for her they were the lowest people in society."

It is one of the great ironies that Thatcher's dogmatic belief in the power of the market helped shape the football boom of the 1990s - either through the conditions which allowed Rupert Murdoch to build Sky or by leaving clubs free to float on the Stock Exchange.

And while Lord Justice Taylor's report on the Hillsborough disaster might not have ordered the introduction of all-seater stadiums, his damning criticism of the game's authorities and facilities was the catalyst for English football's modernisation.

But it was not only football where Thatcher made enemies.

Her call for British athletes to boycott the 1980 Moscow Olympics forced nearly all sports to circle the wagons.

In the end the British Olympic Association, led by chairman Sir Dennis Follows, defied the boycott allowing athletes like Sebastian Coe and Daley Thompson to go to Russia and win gold. But even now those involved can't forget the pressure they were placed under.

A letter from Thatcher to the British governing bodies of Olympic sports, published by the Guardian back in 2006, showed just how much pressure she was placing on British sport.

Coe became the focus of attention and his father and coach Peter even attended a meeting with Douglas (now Lord) Hurd in which he tried to persuade him not to go.

What is striking about all this is just how little regard Thatcher seems to have had for the sporting dedication and ambitions of those involved. For her the only thing which mattered was solidarity with the Americans over their opposition to the Soviet invasion of Afghanistan.

In his autobiography, Coe sums up his attitude towards that stance, saying: "Using (sport) as a weapon was both craven and self-defeating."

It was not the only time she played international politics with sport.

When Geoffrey Boycott helped organise the first English rebel tour to South Africa in 1982, Thatcher was critical saying the move could threaten the future of multi-racial cricket and the financial structure of the sport.

And yet her Conservative government blocked sanctions against the South African apartheid government for years. Boycott, whose international career was ended following a three-year ban for going on the tour, dismisses Thatcher's views as political posturing.

"The tour was never about politics," he said. "It was about cricket.

"If the politicians really wanted to do something about apartheid then they would have stopped big companies like British Airways from going there. We were easy, cheap shots."

Thatcher may have privately regarded sport with affection thanks to her husband Denis, a rugby referee, golfer and cricket lover. But publicly and politically she only seemed to become involved in a time of controversy or crisis.

Her belief in the power of the individual often ran contrary to the sense of community which lies at the heart of sport.

David Pickup, the former director general of the UK Sports Council (now UK Sport), wrote at the end of the 1980s of a lack of "specific endorsement - or even rejection - by the Government for sports policy".

Surprisingly, adult participation in sport peaked in 1990 at 48%, but that was more a product of greater investment in sport in the 1970s. As the state shrank so too did public money for sport and local authority facilities.

It is an approach that seems so alien now, eight months on from London 2012, one of the most successful Olympic Games in the history of the movement. Sport is now firmly at the centre of public and cultural life in this country.

But that is a legacy which has little to do with Margaret Thatcher.