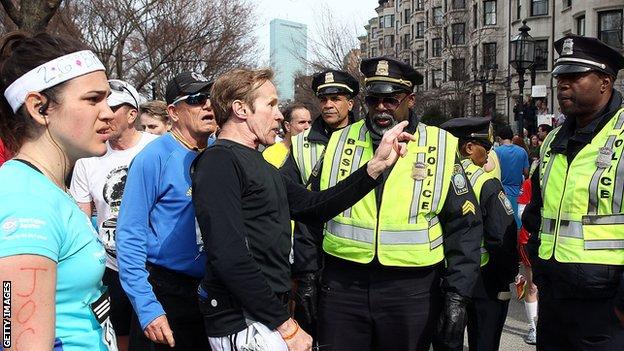 Security for Sunday's London Marathon will be reviewed after two fatal explosions hit the Boston Marathon in the US, British police have said.

At least three people were killed and more than 100 injured by the blasts near the finish of Monday's US event.

The Metropolitan Police said a security plan was in place for London's race but "we will be reviewing this".

Organisers of the London Marathon moved quickly to announce a full review of security following the tragic events in Boston.

But the chief executive Nick Bitel insisted there was "absolutely no chance" that this year's marathon would be cancelled.

While that comment, delivered on BBC Radio 5 Live just a couple of hours after news broke of the two simultaneous explosions, may have felt a bit knee jerk the defiant sentiment was right.

A total of 36,000 runners including the double Olympic champion Mo Farah are due to take part in the race from Greenwich Park to the Mall. But, as with so many big city marathons, London's is a joyous celebration of all talents, not just the elite. This is what makes it one of the highlights of the British sporting calendar.

The peaceful triumph of last summer's Olympic Games in London had reduced security concerns around this year's event. But protecting a 26 mile course which is completely open to hundreds of thousands of spectators is always a major challenge for the Metropolitan Police and organisers.

The dreadful and terrifying images emerging from America overnight have ensured that the question of terrorism will now hang heavy over Sunday's event.

What happened in Boston provides another chilling reminder of how vulnerable sport can be.

Mr Bitel said in a statement: "We are deeply saddened and shocked by the news from Boston.

"Our immediate thoughts are with the people there and their families. It is a very sad day for athletics and for our friends and colleagues in marathon running.

"Our security plan is developed jointly with the Metropolitan Police and we were in contact with them as soon as we heard the news."

He later told BBC Radio 5 live: "When you have an event of any nature, a marathon, parade, it's only as safe as the city itself. If it's not held in a stadium you can't do a lockdown like you may do in a building."

The London Marathon, which first took place in 1981, was completed by more than 37,000 people last year. The route, which is lined by hundreds of thousands of spectators every year, starts in Blackheath and finishes near Buckingham Palace, passing some of the capital's most recognisable landmarks including Tower Bridge, Canary Wharf and Big Ben.

BBC sports editor David Bond said the events in Boston had "ensured that the question of terrorism will now hang heavy over Sunday's event".

And BBC Sport news correspondent Richard Conway added: "Marathons like Boston are so open. They are big events which take in large tracts of the city, very difficult to police in its entirety. At the Oxford-Cambridge boat race last year we had someone who decided they wanted to protest in the river. It is very difficult in these large events to make sure they are policed throughout the length and breadth of them.

"There will be reviews of security throughout sporting events now, not just in marathons.

How secure are marathons?

The Boston Marathon is one of America's premier sporting events but with 26.2 miles coursing through the suburbs and crowded centre, it is also one of the hardest to keep safe

"We are in an era of globalised sport, where there are mass events attended by tens, hundreds of thousands of people. Police and organisers will be concerned and worried by these scenes at this sporting event."

According to the Boston Marathon website, 374 of the more than 25,000 registered entrants to one of the US's biggest sporting events were British, but there has not been any information about British casualties at this stage.

UK Athletics confirmed that none of its elite runners had taken part.

A Foreign Office spokesman said: "We are aware of the incident and we are trying to gather information."