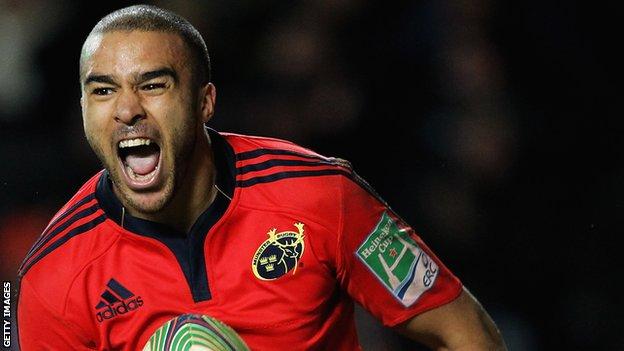 Zebo joined the squad as cover on Tuesday and goes straight into a strong side containing up to a dozen likely Test contenders.

With the first Test against Australia on 22 June, George North (hamstring), Brian O'Driscoll (groin) and Manu Tuilagi (shoulder) are all not risked.

But fly-half Jonny Sexton has been passed fit to start.

The Irishman will line up alongside likely Test half-back partner Mike Phillips.

The back five of the pack also has the look of a Test combination, with Alun Wyn Jones and Paul O'Connell - who started the first Test in South Africa together four years ago - paired in the second row.

Captain Sam Warburton and fellow flanker Tom Croft both start only their second game of the tour, alongside Jamie Heaslip at number eight.

But head coach Warren Gatland insists that there are still places up for grabs and that nothing will be decided until after Tuesday's final warm-up game against ACT Brumbies.

"A good confident performance on Saturday will go a long way for some players, but we are still looking at combinations and have said to them that the Test team won't be selected until after Tuesday," he said.

England hooker Tom Youngs also has a further chance to press his claims in the front row alongside likely Test props Mako Vunipola and Adam Jones.

With Alex Cuthbert rested after starting three of the first four games of the tour, Sean Maitland reverts to his favoured right wing berth after starting at full-back in Tuesday's 64-0 win in Newcastle against a Combined Queensland-NSW Country XV.

Ireland wing Rob Kearney is also set for his first action off the bench after missing the first four matches with a hamstring tear.

With Tuilagi's availability for Tuesday and the first Test now uncertain, and O'Driscoll being carefully managed to ensure he is fit to face the Wallabies, Gatland summoned Billy Twelvetrees from England's tour of Argentina to ensure the Lions have adequate midfield cover.

"With one week to the first Test the Lions have picked their strongest team so far. In the pack, the back row looks likely to face the Wallabies in Brisbane, it's also a big chance for Sean Maitland, Jonathan Davies and Simon Zebo to impress."

The plan is for Twelvetrees to go straight into the side against the Brumbies, while Jonathan Davies - who partners fellow Welshman Jamie Roberts for a second time on tour on Saturday - may also be pressed into service for a second time in four days.

"We have got a full complement of forwards but the backs have tended to take most of the punishment, probably because of the way we have played," Gatland noted.

"We have moved the ball a lot, played a heck of a lot of rugby and some of the metres the backs have covered and the work they have put in has taken its toll a little bit."

North was taken off at half-time on Tuesday after feeling some tightness in a hamstring, while O'Driscoll woke up "a little bit sore" on Wednesday after doing the splits late on against the Country XV as he attempted a kick up the left touchline.

"We spoke with Brian specifically about this before the tour and said we didn't really want him to play more than one game a week," Gatland added. "If at any stage his body was a bit sore, we wanted to make sure we kept him fresh and didn't tire him out."

The Waratahs, without nine other Wallabies either preparing for the first Test or injured, have been bolstered by the release of flanker Dave Dennis and centre Rob Horne from the Australia squad.

Half-backs Bernard Foley and Matt Lucas have also been released from the Australian Sevens squad preparing for the Sevens World Cup at the end of the month.

Gatland welcomed the extra strength of Saturday's opponents after criticism of the weakness of the other Australian sides - Queensland Reds apart - they have faced so far.

"It is great for their players and great for us as well," he added.