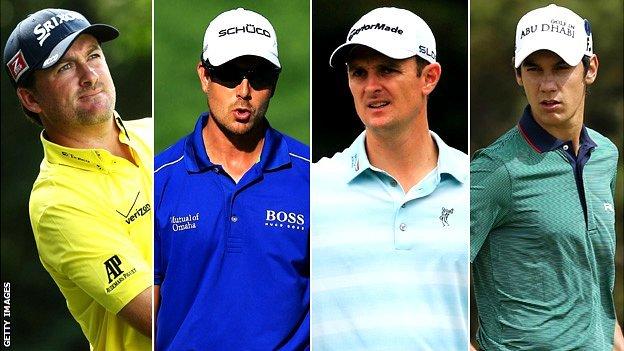 As Europe's leading golfers embark on the latest Ryder Cup qualifying process, it is time to seek clues suggesting who will be the dozen to defend the trophy at Gleneagles.

This week's Wales Open at Celtic Manor marks the start of the competition for places in Paul McGinley's team to take on the United States in September 2014.

As for the last home match, there will be nine automatic qualifiers supplemented by three captain's wildcard picks.

The four highest earners from the European Tour's money list will be joined by the five leading world ranking points accumulators.

Several of the heroes of last year's "miracle of Medinah" are in need of a marked improvement in their 2013 performances if they are to be sure of their place in Scotland next year.

They include Rory McIlroy and Luke Donald, who, on the statistical evidence of their results this year, look like they would need a captain's pick.

Neither player is in the top nine, and they are not alone in that among the team that mounted the spectacular final-day comeback that retained the trophy on the outskirts of Chicago last September.

Also absent from the list is Martin Kaymer, the man who holed the putt that ensured the Cup would stay in European hands. Paul Lawrie, Francesco Molinari, Peter Hanson and Nicolas Colsaerts are the others who have lost the form that made them Ryder Cup stars in 2012.

Based on their form this year, Henrik Stenson, Graeme McDowell, Justin Rose and Matteo Manassero are the leading four Europeans on the Race to Dubai money list.

Aside from that quartet, the five highest accumulators of world ranking points in 2013 are Lee Westwood, Sergio Garcia, Jonas Blixt, Jamie Donaldson and Ian Poulter.

America-based Swede Blixt, the champion at the Greenbrier Classic, would need to join the European Tour to become eligible for Gleneagles.

The points he accumulates only count from the moment he becomes a member, which would be on 1 January 2014. The same applies to Scottish Texas Open winner Martin Laird.

These two US-based Europeans will therefore miss out on several opportunities to rack up early qualifying points and be forced to play catch up.

The remaining PGA Tour play-off tournaments and lucrative events such as the Alfred Dunhill Links Championship, WGC Champions in Shanghai and season-ending Tour Championship in Dubai, offer important chances for players to gain a head start.

McIlroy is traditionally strong at this time of year and needs to take his chance to ease the pressure on himself before next season's majors roll around.

There is nothing to suggest that the current consistency of Stenson, Rose, McDowell and Westwood is going to come to an imminent end. These four plus McIlroy are bankers for the team bidding to win the Ryder Cup for the third time running.

Kaymer is finding encouraging form in recent weeks and the word on the range is that he is starting to return to the form that took him to the top of the world rankings in April 2011.

It is more than a year since Garcia missed a cut, so it is reasonable to assume the Spaniard will do enough to guarantee a seventh appearance.

Poulter needed a wildcard last year and will be very keen to find one of his purple patches to ensure he earns enough to achieve automatic selection.

The catalyst for the Medinah comeback has embarked on a hectic global schedule between now and the end of the year and there is every chance he can make early inroads into that objective.

Always dependable in team events, Donald is harder to predict. The spark that took the Englishman to the top of the world rankings has been missing for most of this year and he has struggled to throw off the hangover of his near miss at the US Open in June.

Donald may require one of the three picks, with a younger brigade likely to mount concerted challenges for the automatic spots.

Manassero, Thorbjorn Olesen and Chris Wood join the likes of Laird and Blixt in spearheading the quest for Ryder Cup debuts. A resurgent Paul Casey is also likely to be a factor.

If Laird does not recover from his late entry to the qualifying period, the captain will be keen to have a Scottish influence from elsewhere. Can Lawrie rediscover the form that brought him back into the fold last time?

Scott Jamieson, Marc Warren, Stephen Gallacher and Richie Ramsay will never have greater career incentives than the one that arrives this week. How McGinley would love to have one or more of them force their way into his team.

Right now, though, it is merely a fascinating guessing game like the personal one Colin Montgomerie played when he was appointed skipper for the 2010 match.

He wrote down the 12 names he thought he would be leading. They were put in an envelope and left in a study drawer and Monty never divulged the names on his list.

Happy to be proven wrong and not constricted by the responsibilities of captaincy, here is my predicted line-up of qualifiers for the trophy defence: Rose, Stenson, McIlroy, McDowell, Westwood, Kaymer, Garcia, Poulter and Casey.

The three wildcard picks: Donald with Manaserro and Laird, who would be the sole rookies in the line-up.

It is all a bit of fun at this stage - the serious stuff starts on Thursday.