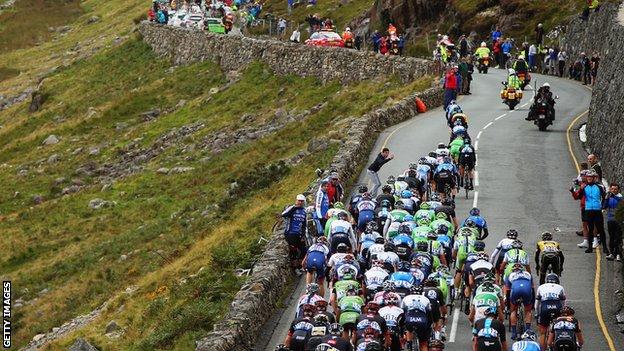 As the Tour of Britain reached its halfway point, BBC Sport's Matt Slater spent stage four in one of the team's support cars to get a unique insight into the event and the people keeping the race on the road.

10:28 BST: "It's a mystery. Everybody is trying to do the same thing and everybody knows that everybody else is trying to do it. So there really is no way of knowing which one will stick. But one will, and you just have to be in it."

One day somebody with a beautiful mind will win a prize for working out how breakaways are formed in bike races. But until they do, Malcolm Elliott's explanation is as good as it gets, which is handy because I am riding shotgun from Stoke to Llanberis in Node4 Giordana Racing's lead car and he is driving.

10:45: We're off… or, more precisely, the riders are off. The cars have to follow in an order dictated by the position of your best-placed rider.

After a decent start in Scotland, Node4 have endured a soggy couple of days in England's North West and their top rider is in 31st, good enough only for next to last in the convoy.

The sat-nav says 10:47 by the time we cross the start but within 90 seconds the voice of Trevor 'Race Radio' Reade, the Tour's all-seeing eye, is calling us to the front: one of Malcolm's men has a problem.

A frantic rummage ensues and suddenly I am paying for my passage by handing over an important item of high-performance clothing. "Sweet," says "Lamps" - and off he flies.

On any normal day, this wardrobe moment would have cost Elliott his licence. Three times over. But this is stage four of the Tour of Britain, which means you are allowed to drive like The Stig from Top Gear.

11:03: Strictly speaking, we have not started racing yet. We are still in the six miles of "neutralised section" that gets us out of the city centre, but Elliott is worried. "It's very quiet. Is this radio working?"

Elliott speeds up to get alongside the Omega Pharma Quick-Step car in front. Former pro Brian Holm is behind the wheel. "Ja, ja, it's very quiet," shouts Holm, who often refers to himself as "U-Boot Kapitain" on Twitter.

They have known each other since their racing days, when Elliott was one of the best British riders of his generation - or any other. Not only did he win the amateur and professional versions of this race, he also won a jersey at one of cycling's three grand tours, the points competition at the 1989 Vuelta a Espana.

"Every time I see Brian his beard is getting longer - he looks like a garden gnome." Elliott's tonsorial critique is interrupted by the radio. "Very high speeds at the front. Many teams represented. No advantage gained. Close those gaps, please, gentlemen."

11:31: While the great breakaway mystery is being played out, I ask Elliott about the unbroken line of spectators we have been whizzing past.

Sir Bradley Wiggins taking the race lead on Tuesday would have helped, he says, but then remembers he heard a "Tour of Britain weather forecast" on BBC Breakfast. It is in moments like that, and the sight of entire schools waving "Go Wiggo" and "Come on Cav" posters, that cycling's move to the mainstream becomes visible.

And then it happens. Seven riders go clear, with four more hammering it up to them to make an 11. "You can tell when a break has got away," says Elliott, "everybody else stops for a wee."

The relief is palpable; Node4 have a man in the break.

12:14: The race has found its rhythm. The 11 riders, from 11 different teams, open up a three-minute gap. With none of these escapees representing much of a threat to Wiggins' lead, Team Sky are unruffled.

Node4's presence in the break is Mike Northey, one of five New Zealanders in the six-man team. In fact, the Staffordshire-based squad is practically Mike and his mates, as it was Northey who recommended the other four after he rode for the team in 2012.

With a couple of wins on the British circuit to his name, Northey is the team's leader, but a couple of bad days have left him eight minutes off the pace. The team needs more from him. They also need a new sponsor; the cash they get from Node4, a British company that provides IT storage centres, is only guaranteed until the end of the season. Elliott says the team are already operating on half the annual budget of other squads on the British circuit, which amounts to little more than what Team Sky will be paying its riders for this week's work. There is little financial fair play on display here.

As we roll into Wales, we are summoned to the front of the pack once more. Shem Rodgers has got a puncture. Team mechanic Richard Hargreaves jumps out and does the honours.

Minutes later, Shem's back. "Have you got a 15mm spanner? The brake is rubbing against the wheel." Hargreaves leans out at 30mph and has a look. The brake is not the culprit; it is the tyre. Poor Shem is nudged to the side of the road and given a second new wheel. Race Radio's "iechyd da", or "cheers", is greeted with silence.

13:21: The first intermediate sprint is behind us, as is the break's biggest lead (4 minutes 10 seconds). Our intrepid pacemakers have been through the feed zone and we have opened our sandwiches. But there is a problem up ahead - and his name is Roman van Uden.

"I can't breathe, Malcolm," the 24-year-old Kiwi tells us through the window. "Nobody told him he had to train," sighs Elliott as Van Uden's involvement in the race becomes more tenuous with each weary pedal stroke. We reach the halfway point of the day's 117 miles and Van Uden climbs off.

"Roman's candle has fizzled out," remarks Elliott. Having lost Dan Barry on Monday, Node4 are now four. We drive through Loggerheads. "I am at loggerheads with you," says Elliott.

14:17: Sprints two and three go by. Tom Scully, another New Zealander, wins both and leads that competition for Team Raleigh. Northey has not contested them, saving his legs for the three King of the Mountains climbs. He was fourth at the start of the day, but the men in first and third are in the break too. This is our race within the race.

Elliott wants to see what is happening, so he radios ahead to Node4's second Subaru and suggests we swap places in the convoy. This means getting past Sir Bradley and the rest of the peloton's nobility on a narrow lane. I had my doubts but liberal use of right foot and car horn get us through.

With the gap down to 2:20, we are alongside Northey fast. "How did you go on those two climbs, Mike?"

"Second and third, Malc," came the answer. That sounded good until we heard that Movistar's Angel Madrazo Ruiz had won both. Northey had moved up one place in the standings with one climb to go.

"I don't think they'll stay away until the climb," says Elliott. "But if they do, it's on."

15:18: "The thing about reeling in a break is that you don't want to do the last bit yourself," says Elliott, as he performs 18 calculations in his head, drives the car, looks at the map once more and reads a text. "Because you often ease back and that's when the next one goes. I think Sky will take it to 30 seconds and let somebody else do the rest."

We zip through Betws-y-Coed, a village in the Conwy Valley, and I make a mental note to come back one day. "What was that place called?" asks Elliott. "It was in Welshese."

15:38: Pen-y-Pass is a mile-long drag upwards, with a youth hostel at the top. From there, the riders drop 250m in elevation, over six twisty miles. How many seconds will the leaders need at the top to keep their pursuers at bay? Elliott thought 60 seconds would do it; they had 80 at the start of the climb.

"When you're tired you don't always make rational decisions," says Elliott, with the air of a man who had just guessed the lottery numbers, moments after making a completely different selection.

"Will all cars pull over and wait for the convoy," our radio orders. We are about to be swallowed.

15:41: "It is all action at the front; there are attacks coming from everywhere." Are we still talking about cycling or is the North Vietnamese Army pouring through our perimeter?

I see Wiggins tucked in behind two team-mates at the front of the peloton, with Garmin Sharp's Jack Bauer bursting up the other side of the road. The break is only 40 seconds clear.

15:45: Back behind the race again, we rejoin the convoy. We are relying on Trevor Reade's staccato commentary.

"Bauer is the lone chaser at 25 seconds. The peloton is at 35 seconds. We have a new lone leader. Northey has five seconds."

"Keisse is the new leader - he has five seconds with 2km to go."

The break is broken. The inevitable is confirmed seconds later - "stage win for Cavendish".

The British national champion loves this race and the feeling is mutual. The win in Llanberis is his eighth in the event - a record - and a popular result with the crowd at the foot of Mount Snowdon.

"Give the public what they want" is Elliott's far-more-gracious-than-it-reads assessment, and Northey's day at the front has lifted the mood.

Farewells and thank-yous are exchanged and I leave Node4 contemplating a night in Oswestry. Twenty minutes later I am in a taxi heading for Bangor station.