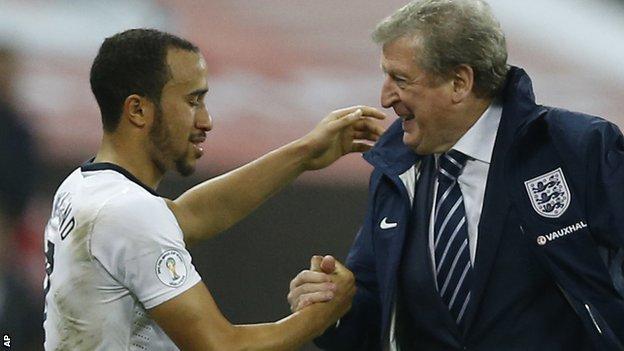 England manager Roy Hodgson wants to give his younger players a chance to stake their World Cup claims in the remaining friendlies this season.

"They give me a chance to give one or two others a chance," he said.

"Roy Hodgson can take England forward but he has a hell of a challenge ahead. Expectations will rise. Remember this is a transitional period. Once Frank Lampard, Wayne Rooney, and Steven Gerrard are finished, the national team will suffer."

Goals from Wayne Rooney and captain Steven Gerrard ensured that England topped Group H to qualify for the tournament, which begins in Sao Paulo on 12 June 2014.

Tottenham winger Andros Townsend, 22, impressed again against Poland as the latest England youngster to be given a chance by Hodgson, having been handed his debut in the victory against Montenegro on Friday.

And while the England boss has seven months to plan for the finals, he may have as few as three friendlies to assess the merits of the players he has to choose.

A home friendly with Germany next month is expected to be announced imminently, with a second November match set to be organised, while opponents for the 5 March date ringfenced in the FIFA calendar might not be agreed until after the finals draw in December.

"We have some interesting friendlies coming up," said Hodgson. "That is a chance to give one or two a chance to put that England shirt on.

"I have been quite consistent in my team selections. A lot of players have played a large number of these 10 qualifying games.

"We know what some of the others - Leighton Baines, Ashley Cole, Michael Carrick, Steven Gerrard, Frank Lampard, Phil Jagielka, Joe Hart - can do."

Former England boss Glenn Hoddle, part of a Football Association commission looking at ways of improving the nation's fortunes, has said the country should forget about winning the 2014 World Cup.

FA chairman Greg Dyke has also played down England's chances of winning in Brazil next year, targeting success in the 2022 World Cup, but Hoddle believes there is the young talent to bring that aim forward.

But under-21 boss Gareth Southgate believes his youngsters have to be dealt with delicately.

"Anything is possible but what we have to be careful with is how quickly we progress them," he said.

"We have a very good link with the seniors but for some slow progress will be better for the long term. There is a balance between those that can go in and make an impression and help the seniors but also, as part of their development, we have to be careful how quick we do that.

"We have been told young English players either can't play in a certain style, or they don't care or they don't play as well as the sum of their parts. The first two I don't believe, we have players of technical ability and I have seen their disappointment when not picked. The third part we have to work towards, being a team."

"I've found it great. I've come in and the lads have treated me well and I've got on with everybody. It's a lot different when you're older, everything has been more calm."