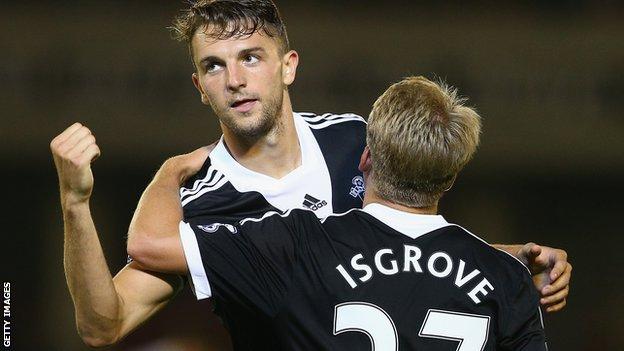 Five years after a loan spell in the Scottish First Division, Jay Rodriguez has a golden chance to stake his claim for a place in England's World Cup squad.

Hardly a household name, outside of his native Burnley and current home Southampton anyway, the 24-year-old striker is the surprise selection in national coach Roy Hodgson's latest squad.

Many pundits predicted Ravel Morrison would be the big gamble ahead of Brazil 2014, but the 20-year-old West Ham midfielder was left in the under-21 squad as Hodgson revealed his hand ahead of the friendlies against Chile and Germany.

Instead, Rodriguez - along with Saints team-mate Adam Lallana - has the chance to book a seat on the plane to Rio next summer.

Lallana, 25, has trained with England once before, ahead of the qualifying draw with Ukraine in September 2012, but has spent the subsequent 14 months out in the cold.

For Rodriguez, this is the first time he has mixed with the senior squad.

While at first club Burnley in 2011, he played 30 minutes as a substitute for England Under-21s in a defeat against Italy, but was then discarded.

He may have considered his international career a wash-out at that point, but it proved he had come a long way from the day he applied for a plumbing course in case he failed to make it as a footballer.

His Spanish-born father Enrique - who goes by the nickname Kiko and was on the books of Deportivo La Coruna before settling in Lancashire - says Rodriguez's grounded nature was behind his desire to take up plumbing.

He told BBC Sport: "Jay was always level-headed and still is. He never takes anything for granted. That is what has helped him in his career.

"He is honest and gives 100%. He did that at Burnley, and does that for Southampton. He will take this call-up well and just try his best. That's what he has done so far."

The modest beginnings of Rodriguez's career did not suggest an England striker in the making.

Having made his Burnley debut as an 18-year-old, he was loaned out to Stirling Albion in 2008 and it was while playing in the Scottish First Division he suffered a heart scare.

The palpitations were checked out by a specialist before he was given the all-clear. International football was far from his father's mind.

"You think to yourself, Stirling Albion and Burnley - that is a long way from the England team," he said.

But he missed out on playing in the Premier League having broken his ankle, instead making six appearances on loan at Barnsley.

He recovered well, though, to end the 2010-11 season as the Clarets' top scorer with 15 goals, and being used as a wide striker with instructions to get into the box as often as possible.

It's the same role Hodgson has in mind for him. "He has done that job a lot for Burnley and Southampton," said Kiko.

Injuries forced new Burnley boss Brian Laws to play him as a central striker the following year, and it was in that position he caught the eye of then Southampton manager Nigel Adkins.

After scoring 21 goals, he was voted onto the Professional Footballers' Association Championship team of the season - and his performances convinced Saints to make him the first player they signed following promotion to the Premier League in 2012.

Burnley received £7m, but Rodriguez featured only sparingly under Adkins.

It was the controversial arrival of Argentine manager Mauricio Pochettino that saw Rodriguez blossom in the Premier League.

Picked ahead of record signing Gaston Ramirez, he responded with crucial goals in wins against Liverpool and Chelsea, playing alongside Lallana and a third England man, Rickie Lambert, in an effective attacking triumvirate.

"He found the Premier League faster and quicker but he adapted and has gained a lot of confidence," Kiko said.

"Some of that has come because he has matured and grown physically and really knows his role now."

But has his game developed enough to persuade Hodgson to give him one of the precious few spaces on the flight to Brazil?

"You just don't know," said Kiko. "If he continues to progress and continues to work as hard as he has done, then he has a chance."