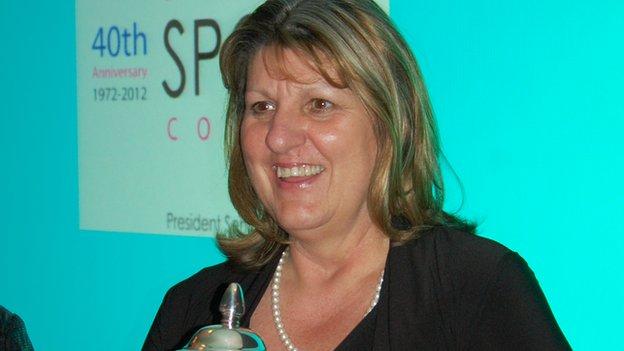 The Jets ended Aquarians' own unblemished record in netball's South West Region One with a resounding 51-31 home victory on Sunday.

"We need to be in the Prem, that is our level," Andrew told BBC Radio Jersey.

"We're winning games by big margins now and seeing that this is not the right level for us with the girls we have."

Last season the Jets missed out on a shot at promotion by a single point, with Cornwall Saints clinching the title.

Andrews added: "It was an absolutely massive win for us. To beat them, who were unbeaten like us before the game, by that big a margin shows how much we have come on."

Andrews praised fans for adding their voice to Jersey's promotion push, with opportunities for the Jets to perform in front of the Les Ormes crowd limited with only four games hosted on the island.

"The support was incredible - I've never seen so many people at Les Ormes and the noise was great," she said.

Jets remain second in the table behind Aquarians but have a game in hand.