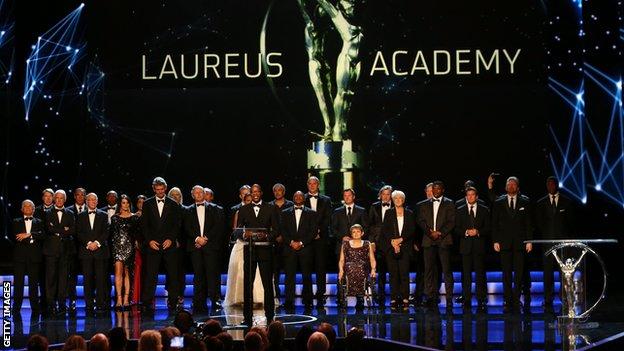 The Laureus World Sports Awards, due to be held in Rio de Janeiro this year, have been cancelled.

The star-studded ceremony, known as the "Oscars of Sport", was due to be held in the Brazilian city in March for the second year running.

Financial problems have been cited as the reason behind the decision.

Neither London-based foundation Laureus or Rio state authorities were able to explain why the event would not go ahead in Brazil as planned.

This is the Rio state government not wanting to be seen to be spending money on sports-related events.

A protest movement that started during last year's Confederations Cup has never really gone away from Rio. The politicians are running scared.

My expectation and hope is that everything will be alright on the night when it comes to the World Cup.

But it's an election year in Brazil, so there will be people out to make political capital from the chaos."

Laureus said it would continue to support sports charity projects in Brazil and would announce plans for this year's awards shortly.

The news represents another setback for Brazil in its struggles to prepare for the World Cup and 2016 Olympics.

It comes after last month and amid ongoing delays in the preparation for the football World Cup, which begins in June.

Fifa president Sepp Blatter has said of any World Cup host he has known, while the International Olympic Committee has also expressed concerns that Rio 2016 organisers have no time to lose.

Despite the disruption, ticket sales for the World Cup have been reported as "exceptional" alongside sales of hospitality packages.

Six times the amount of those packages have already been sold at this stage compared to the last tournament in South Africa in 2010.