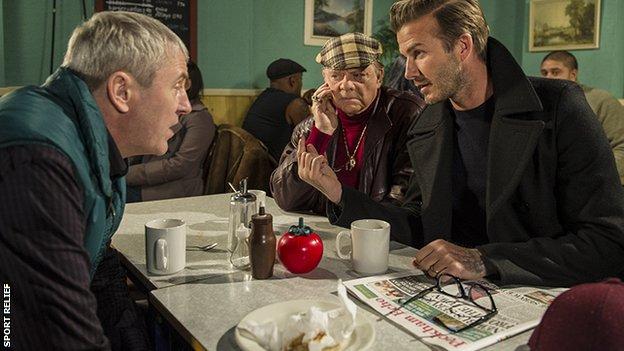 Former England football captain David Beckham will join Del Boy and Rodney in an Only Fools and Horses special for Sport Relief 2014.

Beckham, 38, will feature on his favourite show alongside cast members David Jason and Nicholas Lyndhurst.

The episode, to be aired on Friday, 21 March, is part of a weekend of Sport Relief events across the UK.

Sport Relief raises money for poor and disadvantaged people in the UK and around the world.

His appearance on the show will see Jason, the actor behind wheeler-dealer Del Boy, and Lyndhurst, who plays his on-screen brother Rodney, back together in the first episode of the BBC comedy for 11 years.

Beckham has taken part in previous broadcasts for the charity night, including a 2012 spoof in which he and James Corden cuddled up in bed as best pals, as well as sharing a bath.

Sport Relief raised over £50m on its night of broadcast in 2012 and this year's show will be hosted by presenters including Gary Lineker, Gabby Logan, Claudia Winkleman, Jack Whitehall and Clare Balding.

TV presenter Davina McCall will be among a number of celebrities raising money for the charity through sporting challenges, while girl band Little Mix will sing the official Sport Relief single.

And, for the first time, the public will be able to raise money by running, swimming or cycling over a variety of distances at events taking place over the weekend of 22 and 23 March.