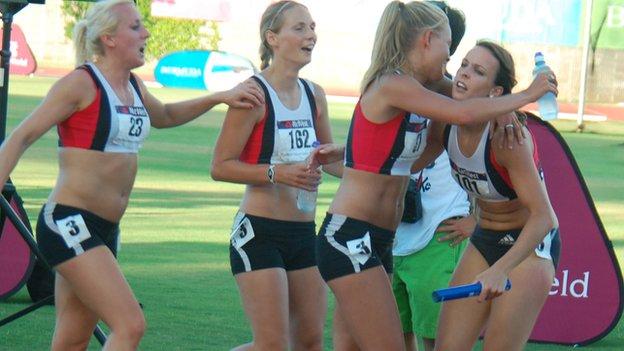 The 2015 Island Games in Jersey is expected to attract a record-breaking 2,900 competitors, putting it on a par with the Sochi Winter Olympics.

Organisers have been marking 500 days to go until the biennial event, which features sports such as swimming, beach volleyball and tennis.

But while the Winter Olympics in Russia cost £30bn to put on, organisers in Jersey have been given a £1.8m budget.

"The challenges and problems will be bigger but Jersey is the right place for the Games to be in for 2015.

"We're ahead of the curve on quite a lot of the preparation. We're moving towards what I think is going to be an incredible occasion for the island."

The Games is set to top the existing record of 2,343 competitors, who appeared at the 2007 event in Rhodes.

Organisers admit their biggest challenge will be transport - both in getting thousands of people in and out of the island, and helping them to move smoothly between venues during the week of action.

"We don't know the flight schedules or when the boats are going to be running, so trying to plan all of that is very difficult," said Phil Austin, chairman of the Jersey 2015 organising committee.

"We've got to move the competitors around once or twice a day maybe, probably in some rush hour times, so we've flagged that up as in the very difficult box.

"I guess in 2015 it's one of the biggest sporting events in Britain."

Nine member island have already paid deposits on hotels, which organisers say is "unprecedented" this far in advance.

"To think that we will be welcoming the same number of competitors to Jersey as are currently competing in the Winter Olympics is staggering," added Austin.

"We want the NatWest Island Games to showcase Jersey at its best and we are already working on a programme that includes cultural exchange and community involvement, as well as sport."

Initial details of a Games Maker volunteer programme have also been released, similar to the scheme widely regarded as a success at London 2012.

Recruitment of 350 to 400 volunteers will begin next month. They are likely to be stationed at Jersey Airport, the harbour and St Helier bus station during the Games, as well as at the sports venues such as Springfield and Les Quennevais.

"We have taken the structure in terms of application process, the training process and the building of the team," said organiser Cliff Chipperfield, himself a Games Maker at the London Olympics.

"Then we'll have, at the end, the specific role training and venue training, so I've really mirrored the structure I experienced.

"Post the experience you'll have 300 to 400 people who really will feel they've taken part and added value."

Meanwhile, the opening ceremony and athletes village venues are also expected to be confirmed in the next few months.