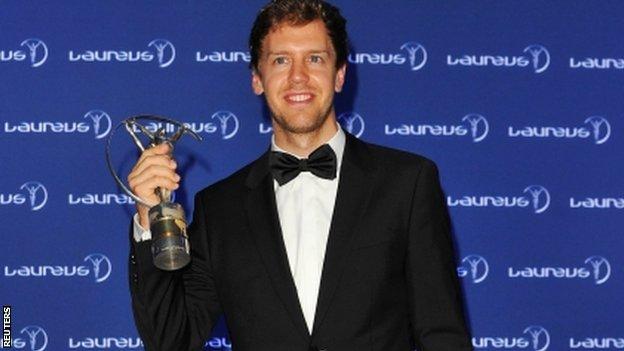 Vettel, 26, was recognised after earning a fourth consecutive title in 2013.

"It's a big honour and one of the most special trophies I have received," Vettel said.

He was presented with the award by former motor racing world champion Emerson Fittipaldi.

Franklin was picked ahead of Serena Williams and Jamaican sprinter Shelly-Ann Fraser-Pryce, and received her accolade from swimming legend Mark Spitz.

Marie Bochet, the French paralympic skier, was named sportsperson of the year with a disability,

Bayern Munich won world team of the year after the German side completed a treble by winning the Bundesliga, Champions League and German Cup.

MotoGP champion Marc Marquez took the breakthrough of the year prize after winning the title in his debut season.

The awards followed a ballot by the world's media, with the winners voted for by the Laureus World Sports Academy, which is made up of 46 of the greatest sportsmen and sportswomen of all-time.

Tributes were paid to missing Malaysian Airlines flight MH370 at the event in Kuala Lumpur.