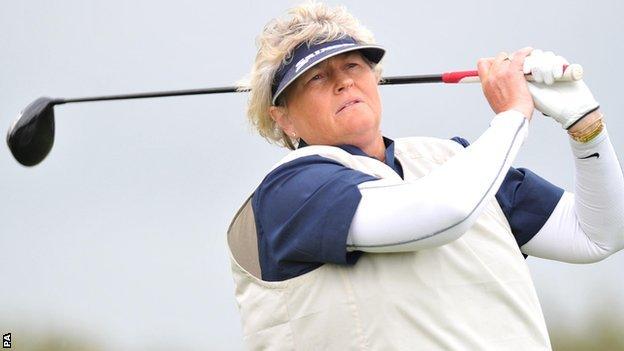 Davies is made a Dame, Edwards becomes a CBE and Gatland is made an OBE.

The BBC's director of sport, Barbara Slater, becomes an OBE for services to sports broadcasting.

Jenny Gunn, another England cricketer, is also made an MBE, along with Jenny Archer, who coached David Weir to his quadruple gold medal haul at the London 2012 Paralympics, retired Scottish racing driver Dario Franchitti and former football referee David Elleray.

Davies is the most successful British female golfer in history with four major wins and has represented Europe 12 times in the Solheim Cup.

"It really is the greatest honour I have received in my career and what makes it even more special is that it is an honour that transcends golf," said Davies.

"It will definitely feel slightly unbelievable to be announced on the tee as Dame Laura Davies."

Yarnold took Olympic skeleton gold four years after trying the sport out for the first time and was also crowned World Cup champion this year.

"It's absolutely mad," Yarnold told the BBC. "I got a letter from the Palace a few weeks ago and my hands were shaking opening it."

Gatland, 50, led the British and Irish Lions on their triumphant 2013 tour of Australia, winning the series 2-1.

The New Zealander also guided Wales to success in the 2008 and 2012 Six Nations, winning the Grand Slam on both occasions.

Edwards made her England debut at the age of 16, the youngest woman to play for England at the time, and became captain in 2006.

The top-order batter won the World T20 in 2009 and has been involved in Ashes victories, including back-to-back wins over Australia in 2013-14.

This year, she was named one of Wisden's Cricketers of the Year, the second woman to be given the honour.

"It's something I'm immensely proud of," Edwards told BBC Sport. "To get the recognition is fantastic for me and the sport."

Swing bowler Gunn, 28, has won more than 100 caps for England and taken 182 wickets for her country in all formats of the game.

The stand-off, 34, has spent his entire career with Leeds, for whom he is the record points-scorer with 3,609 from 462 appearances.

Franchitti, 41, is one of Britain's most successful racing drivers after a star-studded career in the US.

He won the Indycar series four times, first in 2007 and then for three successive years from 2009-11. He is also a three-time victor in America's highest profile race, the Indianapolis 500, which he won three times.