The 2014-15 fixtures have been released for England and Scotland's top four divisions - read them at-a-glance:

England striker Wayne Rooney, 28, spent a whole 90-minute training session up front, as opposed to the left position that frustrated him against Italy. Sun

Uruguay are a two-man team who rely too heavily on Luis Suarez, 27, and Edinson Cavani, 27, according to Northern Ireland boss Michael O'Neill. Daily Star

QPR boss Harry Redknapp believes Uruguay will have "no chance" of beating England if striker Luis Suarez, 27, is not fit. Evening Standard

Suarez's fitness is a national obsession for Uruguay and dominated their TV, radio and newspapers. Daily Mirror

England's crucial World Cup match with Uruguay is worth a staggering £400m to the UK economy. Daily Star

Spaniard Carlos Velasco Carballo, who sent off Bayern Munich's Bastian Schweinsteiger, 29, after an alleged dive by Rooney in April, has been named as the referee for England's crunch game against Uruguay. Guardian

Striker Fernando Torres, 30, says Spain may have to ditch their tiki-taka style if they want to rescue their World Cup dream from disaster. Daily Express

Galatasaray midfielder Wesley Sneijder, 30 admits the chance to join up with Louis Van Gaal at Manchester United might be too good to turn down. Manchester Evening News

Liverpool and Everton are both interested in signing QPR and Cameroon midfielder Stephane Mbia, 28. Daily Star

Manchester United are preparing a £40m bid to try and lure winger Arjen Robben, 30, away from Bayern Munich this summer.Daily Express

Tottenham are lining up a a £3m bid for Sunderland defender John O'Shea, 33, as captain Michael Dawson is free to leave this summer.Telegraph

AC Milan striker Mario Balotelli, 23, is open to a move to Arsenal after his agent revealed 'anything is possible' this summer. Daily Mail

Rubin Kazan's France international midfielder Yann M'Vila, 23, is set to reject Liverpool and Arsenal in favour of a move to Inter Milan.Daily Star

Swansea are the latest club to be linked with a summer move for Sunderland left-back Marcos Alonso, 23. Sunderland Echo

Arsenal and Liverpool also want Mexico goalkeeper Guillermo Ochoa, 28, who is keen to play in the Champions League after becoming a free agent. Daily Express

Everton boss Roberto Martinez is confident he can land Barcelona winger Cristian Tello, 22, on a season-long loan as the Spanish club seem willing to let him out for the campaign, rather than offload him permanently.Sun

Crystal Palace are moving closer to a £1.5m deal for former Everton midfielder Diniyar Bilyaletdinov, 29, who spent the second half of last season on loan at Anzhi Makhachkala from Spartak Moscow.Croydon Advertiser

Middlesbrough are keeping tabs on Sammy Ameobi, with Newcastle open to offers for the 22-year-old forward.Newcastle Journal

Premier League newcomers Leicester City are interested in Port Vale's out-of-contract defender Joe Davis, 20, who has been offered a new deal by the Valiants. Stoke Sentinel

Spain national team coach Vicente Del Bosque says the team must be brave and aggressive in their match against Chile on Wednesday. Marca (in Spanish)

South Korean striker Lee Keun-ho, 29, who scored a crucial goal for his team to earn a draw against Russia, has always "been chronically undervalued as a football asset" and his goal "had a taste of redemption". Korea Times

Argentina forward Lionel Messi, 26, has asked his manager to change the team's formation for the game against Iran, because Iran, like Bosnia, will be quite defensive when they face each other on Saturday. Abrar News (in Farsi)

Former Australia coach Pim Verbeek says the Socceroos have no chance against the Netherlands on Wednesday. Sydney Morning Herald

Chelsea owner Roman Abramovich appeared to concede defeat in his quest to relocate Chelsea after commissioning a study to explore the possibility of expanding Stamford Bridge. Daily Telegraph

New Chelsea midfielder Cesc Fabregas, 27, says he told Barcelona to let him leave, and claims they tried to stop him departing. Sky Sports

Stoke boss Mark Hughes has returned from holiday keen to resolve the future of 25-year-old midfielder Steven Nzonzi, who has again hinted at a move. Stoke Sentinel

Brazilian forward Neymar, 22, wrote on Facebook: "Despite the draw, lived today one of the biggest thrills of my life," alongside a photo of him in tears during the national anthem ahead of their game against Mexico. 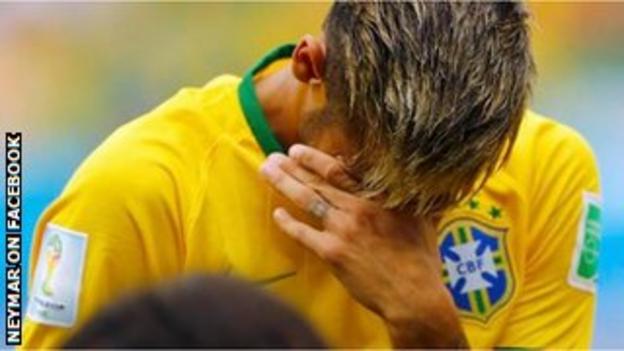 England winger Raheem Sterling spent some time messing around with a ball on the beach on Tuesday. He posted a photo with the message on Instagram:"Today on the beach a give them some joga bonito Brazilian style."

Indie rock band Kaiser Chiefs post a video on Facebook of #myworldcupseat in a bar while on tour in the USA.

Spain striker Fernando Torres on Twitter: We are here to win games for our country. We want the three points. Now more than ever #allinornothing.

Belgium midfielder Marouane Fellaini on Twitter, following his side's 2-1 win over Algeria: Well done for the first game. Thanks for your support. You are really amazing. Now focus for the second one

German astronaut Alexander Gerst on Facebook: "We managed to fit 20 minutes of live #worldcup in between our 10 hours of science experiments. Congrats to the German team from space!"

USA striker Clint Dempsey posted a photo on Facebook of himself with American vice-president in the team dressing room following their victory over Ghana.

According to Twitter, there were 8.95m tweets during the Brazil v Mexico game on Tuesday. That's the second most-tweeted World Cup match so far.

Brazil legend Pele had to listen to the first half of the World Cup hosts' 0-0 draw with Mexico on the radio because of traffic jams in Sao Paulo. Yahoo

Argentina forward Lionel Messi, 26, tracked down and had a photo with the mascot whose hand he inadvertently missed shaking before the Bosnia-Hercegovina game. Bleacher Report