Brazil legend Zico laments the loss of injured forward Neymar, saying: "We cannot overstate his importance." He criticises Fifa for not being stricter with fouls, adding that Colombia's Juan Camilo Zuniga should be punished retrospectively for his challenge that ended Neymar's World Cup. Observer

Chelsea boss Jose Mourinho claims the absence of suspended captain and defender Thiago Silva, 29, "is as or more important" to Brazil than the loss of Neymar. Marca

Germany striker Lukas Podolski, 29, says the pressure is all on hosts Brazil ahead of their World Cup semi-final. Sunday Telegraph

Brazil insist they can win the World Cup without Neymar, 22, but on the beaches, fans are already in mourning. Observer 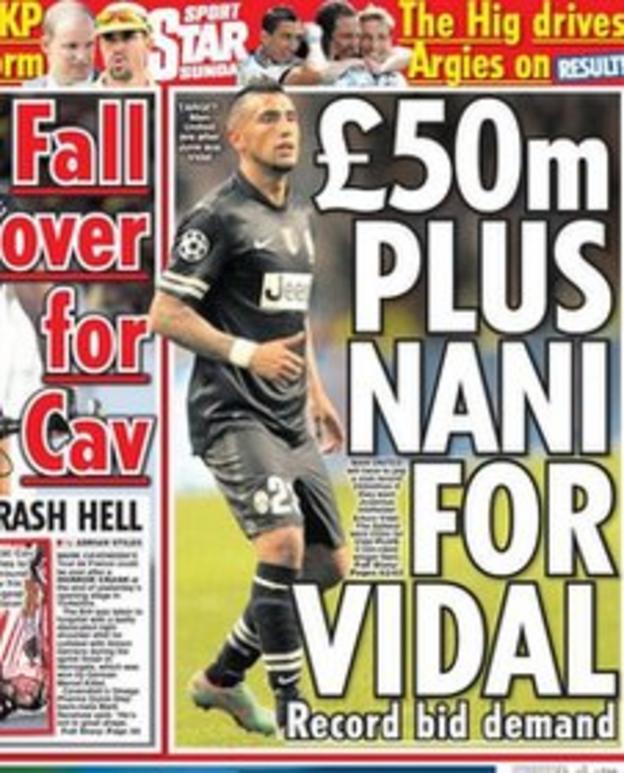 Liverpool will make a last-ditch attempt to persuade former England full-back Ashley Cole, 33, to join them. Mail on Sunday

Everton will dismiss any interest in midfielder Ross Barkley, 20, from Manchester City - but manager Roberto Martinez could consider a deal to bring Jack Rodwell, 23, back to Goodison Park. Liverpool Echo

Newcastle United defender Mathieu Debuchy, 28, has confirmed he will be joining Arsenal this summer. Sunday Express

Newcastle are eyeing up a move for Ajax right-back Ricardo van Rhijn, 23, this summer as a replacement for Debuchy. Metro

Manchester City insist there is no panic at Etihad Stadium over Edin Dzeko's failure to sign a new contract. The 27-year-old Bosnia-Hercegovina striker is one of six City players with only 12 months left on their deals and was expected to agree an extension after playing a key role in their title triumph last season. Sunday Mirror

Tottenham's France international goalkeeper Hugo Lloris, 27, asked whether he would be at Spurs next season, said "I should be" but also told reporters: "I don't want to speak about my situation now." London Evening Standard

Netherlands goalkeeper Tim Krul on Twitter after his penalty-saving exploits as a substitute took his team into the World Cup semi-finals: "Words can't describe how proud I am to be part of this team and this fantastic journey."

Argentina playmaker Lionel Messi posts a Facebook picture of his jubilant team-mates after their quarter-final win over Belgium with the words: "Another little step!!! Vamos Argentinaaaaaa!!!"

Fifa president Sepp Blatter on Twitter: "Read you returned home today Neymar. The World Cup is now missing a star. Get well soon, and back on the pitch."

Brazil and Chelsea midfielder Oscar on Twitter about Neymar: "I love you, my brother! That's all I can say at this time! You can be sure that we will run twice for you!"

Argentina coach Alejandro Sabella expressed his sympathy for Brazil's injured striker Neymar, but his team's fans celebrated with a spinal cord skeleton after the win against Belgium. Mail on Sunday