Germany centre-back Mats Hummels, 25, says they went easy on Brazil during the second half of their World Cup semi-final to avoid causing even more embarrassment. Sun (subscription required)

Hummels' fellow defender Per Mertesacker, 29, says the team that beat Brazil started their journey to the top by thrashing England in the Under-21 European Championship five years ago. Daily Mirror

Political analysts argue that Brazilian president Dilma Rousseff's campaign for re-election will not be damaged by such an embarrassing World Cup defeat. Guardian

West Ham must raise their bid for Dnipro's 24-year-old Ukrainian winger Yevhen Konoplyanka to £12m if they want to sign him.ESPN FC

However, the Hammers will target Ecuador international Enner Valencia, also 24 and currently with Mexican club Pachuca, if their Konoplyanka move fails. Daily Telegraph

New Manchester United boss Louis van Gaal would like to bring 30-year-old Wesley Sneijder, part of his Dutch side at the World Cup, to Old Trafford from Galatasaray but the Turkish club want a fee of around £16m.Sun (subscription required)

Liverpool will sell Uruguay striker Luis Suarez, 27, to Barcelona this weekend if the clubs can agree a £75m fee. Daily Mirror

But Arsenal are fuming because their attempt to sign Chile forward Alexis Sanchez, 25, from Barcelona is being held up by the Suarez deal. Daily Express

The Gunners want £6m for Mikel Arteta, 32, following interest from Italian club Fiorentina in the midfielder, who is in the final year of his contract. Times (subscription required)

However Arteta's agent has told Florence station Radio Blu his client has no intention of leaving the FA Cup holders.

Arsenal will have to make Germany midfielder Sami Khedira, 27, their highest paid player if they are to tempt him from Real Madrid. Daily Mail

Liverpool forward Iago Aspas, 26, is set to join Sevilla after failing to make an impact at Anfield. Daily Star

Manchester United, Liverpool, Chelsea and Arsenal are set to battle it out for Benfica winger Joao Filipe, dubbed 'the next Cristiano Ronaldo', and goalkeeper Joao Virginia, both just 15. Daily Express

But the Reds' new manager would like to bring 24-year-old Dutch defender Daley Blind to the club from Feyenoord if Evra leaves. Manchester Evening News

Benfica's Serbian winger Lazar Markovic, 20, will have a medical on Merseyside on Thursday before completing a £20m move to Liverpool. Liverpool Echo

Aston Villa manager Paul Lambert is convinced that 32-year-old Joe Cole, who joined the club this summer, still has the hunger to succeed in top-flight football. Birmingham Mail

Alan Hutton, 29, wants to speak with Lambert after a proposed move for the defender to West Brom was called off because the Villa boss is keen to include the Scotland international again following two years spent away on loan. Daily Mirror

Out-of-favour Manchester United forward Bebe, 23, and midfielder Anderson, 26, will get one last chance to impress on the club's pre-season tour of the United States. Manchester Evening News

The arrivals of Chile forward Alexis Sanchez, 25, from Barcelona and France right-back Mathieu Debuchy, 28, from Newcastle can help Arsenal regain the Premier League title, according to their former midfielder Edu. Talksport

Former Fulham captain Brede Hangeland has criticised Cottagers manager Felix Magath, saying the German is not the man to take the club back to the Premier League. Sky Sports

Following his departure for Burnley, ex-Blackpool keeper Matt Gilks has spoken about his fears for the future of his former club. Blackpool Gazette

Barcelona's Giovani and Jonathan Dos Santos, 25 and 24 respectively, are both heading to Villarreal after the two clubs reached a transfer agreement for the Mexican brothers.L'Equipe (in French)

Real Madrid forward Alvaro Morata, 21, could join Juventus as early as next week.Tuttosport (in Italian)

Argentina and Man City striker Sergio Aguero posted a photo of his team-mates celebrating their semi-final win over the Netherlands on his Facebook page. 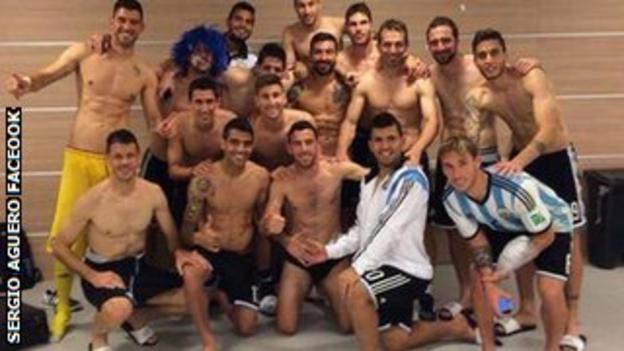 Netherlands striker Klaas Jan Huntelaar said on Twitter following his side's defeat: "What an anticlimax! We must transform these emotions into something positive. Thanks for the support!"

And Germany full-back Jerome Boateng has tweeted a photo of himself relaxing with his family after helping his country reach the World Cup final by beating Brazil 7-1.

Germany's Mesut Ozil told Brazilian fans, via his Twitter account, that they have "a beautiful country, wonderful people and amazing footballers".

Argentina superstar Lionel Messi was chosen to take a drugs test after his country's win over the Dutch, and he posted a photo for his 63 million Facebook followers.

Brazil defender Dani Alves, an unused substitute in his country's humiliating defeat by Germany, has made a strongly worded attack on his side's critics on his Instagram page.

Alexis Sanchez is leaving Barcelona for Arsenal - with the transfer confirmed exclusively by his hairdresser. Metro

The odds on Brazil winning the next World Cup are already a mere 7-1 despite their defeat by Germany by the corresponding scoreline.Racing Post