Brazil's sports minister Aldo Rebelo has called for a radical improvement in the country's youth development system as a response to the "deep scar" of losing 7-1 to Germany in the World Cup semi-final. Guardian

Argentina's 26-year-old striker Gonzalo Higuain says his side are not intimidated by the prospect of facing Germany in Sunday's World Cup final, despite their crushing 7-1 victory over Brazil. Evening Standard

Manchester City and Brazil midfielder Fernandinho, 29, says he will be haunted forever by his country's semi-final rout by Germany. Sun (subscription required)

Fare, a campaign group promoting equality in world football, has produced a report highlighting dozens of instances where Fifa has failed to punish racist and homophobic activity at the World Cup in Brazil. Daily Telegraph

Neymar's agent has launched a scathing attack on Brazil manager Luiz Felipe Scolari following the humiliating 7-1 defeat by Germany in the World Cup semi-final, calling him "an old jerk, repulsive and conceited". Independent

Newcastle United are set to make a £5m bid for Feyenoord right-back Daryl Janmaat, 24, after identifying him as the man to replace Arsenal-bound Mathieu Debuchy, 28. Newcastle Journal

Kieran Richardson will become Aston Villa's third signing of the summer after the versatile 29-year-old had his contract at Fulham cancelled by mutual consent. Birmingham Mail

Arsenal have been given a boost in their bid to sign Germany international Sami Khedira, 27, after the midfielder rejected the offer of a new two-year contract at Real Madrid. Daily Star

Chelsea are holding out for a fee of £8m for defender Ryan Bertrand as Liverpool and Tottenham consider a move for the 24-year-old. Daily Express

Liverpool have joined Tottenham in the race to sign Swansea City's 25-year-old Ivorian striker Wilfried Bony, with the Welsh club holding out for a fee of £20m. Talksport

Lazio believe they are favourites to sign Feyenoord's 22-year-old Dutch defender Stefan De Vrij, who has emerged as a transfer target for Manchester United. Daily Express

West Ham are facing competition from AC Milan and Sevilla for 25-year-old Ecuador striker Enner Valencia, who is valued at £12m by Mexican side Pachuca. Times (subscription required)

West Brom boss Alan Irvine has held face-to-face talks with want-away duo George Thorne, 21, and Craig Dawson, 24, to convince both they are in his Premier League plans. Express & Star

Liverpool manager Brendan Rodgers is planning to limit Steven Gerrard's first-team appearances next season in a bid to keep the 34-year-old captain fit until the end of the campaign.Daily Mail

Villa are also set to offer defender Ron Vlaar, 29, a bumper new contract to head off interest in the Netherlands international. Daily Star

Spanish midfielder Mikel Arteta, 32, has no intention of leaving Arsenal this summer according to his agent Inaki Ibanez.Times

France international Antoine Griezmann, 23, has rejected a new contract with Real Sociedad in a bit to force a move to the Premier League. Talksport

Defender Per Mertesacker has posted a picture on Facebook of himself as a child in 1990 wearing a West Germany shirt reminiscing about their World Cup victory over Argentina that year.

Manchester United midfielder Marouane Fellaini has tweeted a picture of himself with a new haircut. The Belgium international has got rid of his afro in favour of a shorter style. 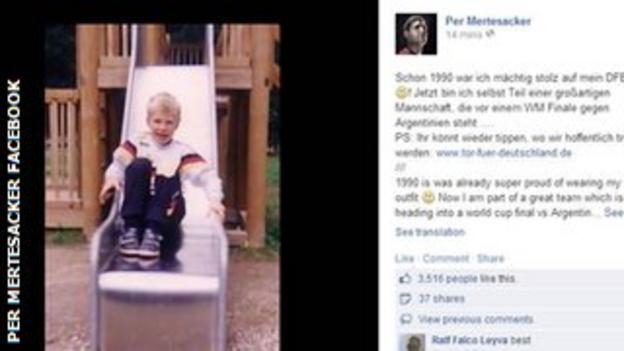 The nominations for the Golden Ball award at this year's World Cup will be announced on Friday through the Twitter account of the official World Cup football.

United States and Everton goalkeeper Tim Howard tweeted a photo of himself with former United States international Alexi Lalas and media personalities at a Fan Fest in New York.

Barcelona defender Dani Alves has posted a goodbye message to Chile winger Alexis Sanchez, who has left the Nou Camp for Arsenal, on Facebook.

Germany and Bayern Munich striker Thomas Muller may well be a success on the pitch with five goals in six games at this year's World Cup, but a video posted on Twitter has revealed the 24-year-old's dancing skills are not quite of the same standard. Metro

Chelsea defender Branislav Ivanovic completed just one day of pre-season training with the thick beard he had grown during his time off before shaving it off. Daily Mail

Birmingham City's players have been preparing for the start of the season with a spot of laser clay shooting. Birmingham Mail