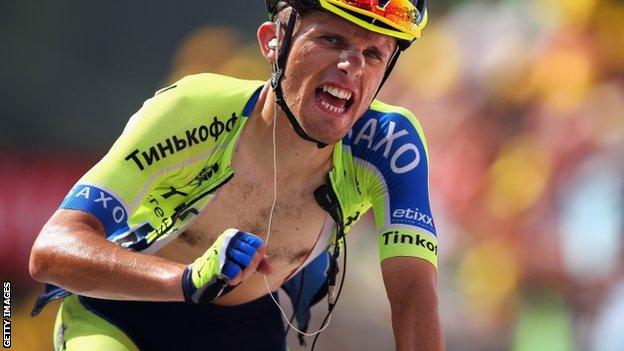 The Italian finished 24 seconds adrift of Polish rider Majka, who recorded his first stage win on his debut Tour.

British duo Geraint Thomas and Simon Yates were in a break that was caught on the final climb to Risoul.

Team Sky principal Sir Dave Brailsford indicated after Friday's stage, when their lead rider Richie Porte dropped out of contention, that the rest of the squad would look to "animate the race" in the remaining eight stages.

Thomas and team-mate Mikel Nieve responded to his words at the first opportunity by getting involved in a 17-man break, which also contained Orica GreenEdge rider Yates, at the start of Saturday's second and final day in the Alps.

Race leader Nibali was content to sit in the peloton, being led by his Astana team-mates, as they allowed the break to build up an advantage of more than five minutes ascending the first of the day's three categorised climbs, the 34km Col du Lautaret.

The breakaway group's advantage was cut to three minutes as they reached the summit of the day's toughest climb, the Col d'Izoard.

Spain's Joaquim Rodriguez, second in the King of the Mountains classification behind Nibali but wearing the polka dot jersey because the race leader always wears yellow, was first over the top to collect 25 points and win the Souvenir Henri Desgrange - the prize awarded to the first man to reach the highest point in the race, at 2,360m.

The points, added to the 10 he collected for being first up the Col du Lautaret, lifted Rodriguez to the top of the mountain classification, despite him falling away on the last ascent to Risoul.

Thomas, who put in a tremendous amount of work leading the breakaway, trying to set up his team-mate Nieve, also found the going tough on the 12.6km climb to the finish and was passed by Nibali and Valverde among others.

Majka, one of the 17 riders to make the initial break, kicked on though and managed to hold off the fast-finishing Nibali to take a first stage win, in a reverse of Friday's result on stage 13.

He dedicated his win to injured Tinkoff-Saxo team-mate Alberto Contador, who crashed out of the race on stage 10.

"This is a victory for Alberto because we came here trying to win the Tour for him," said the 24-year-old Pole.

"This is my first victory and maybe it's not finished. If I can get in another long breakaway I can try to win another stage."

Nibali may well have the Tour all but won, but the race for the minor places is wide open with the four riders below Valverde within 91 seconds of second.

Romain Bardet consolidated his position in third place, despite finishing behind fellow Frenchman Thibaut Pinot, who is fourth. The duo are battling for a place on the podium in Paris and the white jersey as the quickest rider under the age of 25.

AG2R rider Bardet leads FDJ's Pinot by just 16 seconds, while their compatriot Jean-Christophe Peraud is a minute further back. Between them is American BMC rider Tejay van Garderen.

Sunday's 15th stage is a 222km largely flat race from Tallard to Nimes, which is expected to end in a bunch sprint.