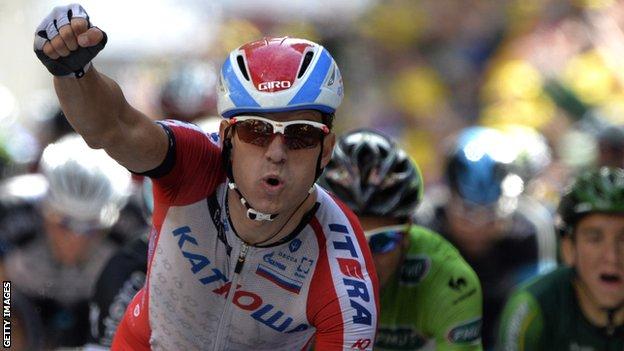 Alexander Kristoff sprinted to victory on stage 15 of the Tour de France to claim his second win of the race.

The Norwegian led the quick men home after they had chased down Jack Bauer of New Zealand and Switzerland's Martin Elmiger 20m from the finish in Nimes.

Heinrich Haussler was second, while Peter Sagan was third to strengthen his grip on the green points jersey.

Garmin-Sharp rider Bauer was in tears at the finish after he was chased down in the closing stages by Kristoff who led the sprinting pack for his second stage win this year.

"It's just a bitter, bitter disappointment. It's a childhood dream to win a stage of the tour and for a domestique, like myself, I'm normally working for others," he said.

"This was my first chance to be up the road and with the change in the wind and the weather, Martin and I realised we had a chance for the win.

Bauer, who finished 10th, had harboured hopes of picking up a first ever stage win as he and Elmiger broke clear in the opening stages of the 222km ride from Tallard in the foothills of the Alps.

The duo battled through stormy conditions and difficult crosswinds and saw their advantage, which had been more than eight minutes at one stage, cut to 60 seconds with 15km remaining.

It seemed as though the sprinters had miscalculated the time they needed to reel in the long-standing leaders, with a number of roundabouts requiring safe navigation in slippery conditions.

Bauer and Elmiger were 13 seconds ahead of the peloton with 1km to go but Kristoff timed his attack to perfection to take victory just metres from the line.

"It was a little bit late for comfort. It was very close," conceded Kristoff. "I thought I would be second. We turned on the gas."

Monday is a rest day and Geraint Thomas, Team Sky's sole British rider left in the race, will analyse how the race is developing in his blog on the BBC Sport website.

Tuesday's 16th stage takes the riders into the Pyrenees mountains from Caracassone to Bagneres-de-Luchon.