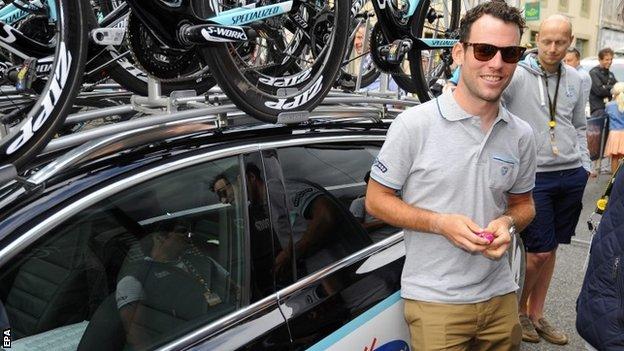 Britain's Mark Cavendish believes he will be fit enough to race in four weeks, with the Tour of Spain on 23 August a potential comeback race.

Cavendish dislocated his shoulder and damaged ligaments in a crash during the opening stage of the Tour de France.

The Briton said he had hoped to recover in time for the Commonwealth Games but realised he did not want to risk his long-term career.

"I got back on a bike on Sunday for the first time since the crash. It wasn't pain free but I could ride on it.

"Initially I thought I could get back for the Commonwealth Games but the more I thought about it and the more I've not been on Tour the more I appreciate my career.

"We are hopefully looking at the Vuelta, but we're not quite sure yet."

Cavendish, who has won 25 stages on the Tour de France, returned to France on Monday to meet up with his Omega Pharma-Quick-Step team-mates.

The Vuelta a Espana, one of the sport's three Grand Tours along with the Tour de France and the Giro d'Italia, starts on 23 August and ends on 14 September.