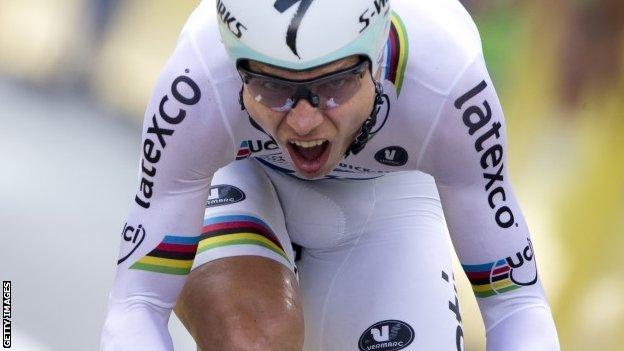 Nibali finished fourth to extend his lead to seven minutes 52 seconds ahead of Sunday's processional race to Paris.

France's Jean-Christophe Peraud moved up to second ahead of Thibaut Pinot.

Nibali still has to finish the race in Paris, but it is a largely leisurely ride into the French capital which usually finishes in a bunch sprint on the Champs-Elysees and should not affect the overall standings.

"It was not an easy time trial, it required a lot of power," said 29-year-old Nibali. "I never thought about that (becoming the first Italian to win since Pantani), I'm not sure I have realised yet."

The Astana rider has dominated this year's Tour, winning four stages and spending 17 days in the race leader's yellow jersey. He is set to become the first Italian since Marco Pantani in 1998 to win the world's most prestigious stage race.

He will also become just the sixth man to win all three of cycling's Grand Tours - the Giro d'Italia, Tour de France and Vuelta a Espana.

Nibali won the Giro in 2013 and the Vuelta in 2010. His previous best finish in the Tour was third place, behind Britain's Sir Bradley Wiggins and Chris Froome, in 2012.

Nibali's winning margin of almost eight minutes will be the biggest since Jan Ullrich won by nine minutes, nine seconds in 1997.

"The team really did a great job for me," Martin said. "They paid attention to all the details. I had a clear idea of the parcours in advance.

"There were always parts with two or three percent gradients, with uphills and downhills. You could go with a big gear, such as my 58-tooth chainring. It was just perfect for me.

"I have already won two Tour time trials, so I am proud to now have a third win."

Nibali finished ahead of his rivals in the general classification to extend his lead by 40 seconds, while 37-year-old AG2R rider Peraud overturned a 13-second deficit to leapfrog Pinot and take second overall, despite having a flat tyre and needing to change bikes during the stage.

Pinot, 24, will also claim the white jersey as the quickest under-25 rider in the race.

Spanish time trial champion Alejandro Valverde had been expected to challenge the Frenchmen but he finished more than two minutes behind Peraud and more than one minute adrift of Pinot.