West Ham have made a bid to sign Cameroon striker Samuel Eto'o, 33, who was released by Chelsea at the end of last season. Sun on Sunday (subscription required)

But Real Madrid are also lining up a move for Lukaku. Sunday Express

Arsenal are closing in on a £19.7m deal for Shakhtar Donetsk's 23-year-old playmaker Douglas Costa, who has requested to leave the Ukrainian club because of the trouble in the region. Caught Offside

Sunderland will consider taking Fabio Borini on a season's loan as the Liverpool striker, 23, stalls over making a permanent move away from Anfield.Sunday Express

Manchester United manager Louis van Gaal has not ruled out signing Roma midfielder Kevin Strootman, 24, despite the Dutchman being sidelined with a cruciate knee ligament injury since March.Sky Sports 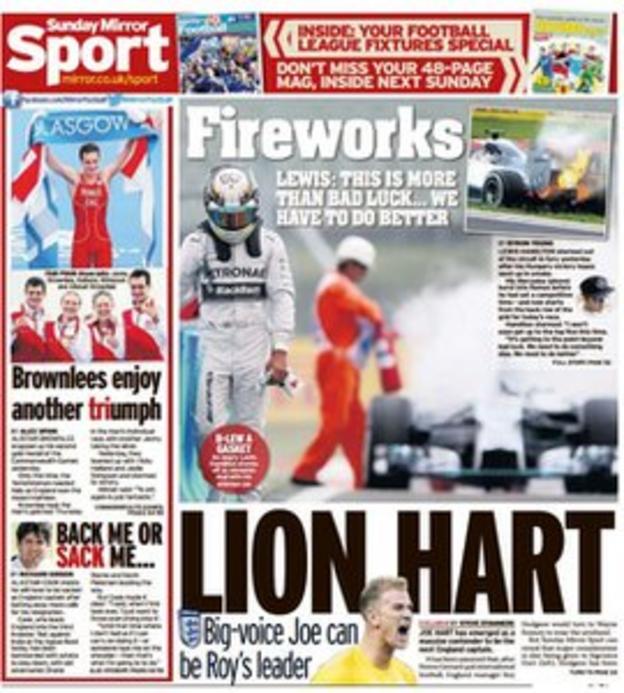 Real Madrid are lining up a £10m loan move for Monaco's Colombia striker Radamel Falcao, 28, with a view to a £26m permanent move in 2015.AS

Stoke City's bid to sign Oussama Assaidi, 25, from Liverpool for £7m is in danger of collapse over the winger's wage demands.Daily Express

Lille striker Divock Origi, 19, is set to complete a £12.5m move to Liverpool in the next few days after choosing the Reds ahead of Arsenal, Tottenham and Atletico Madrid.Sunday Mirror

Manager Harry Redknapp has told QPR chairman Tony Fernandes to sign him some new strikers, with Watford's Troy Deeney, 26, on his wishlist.Mail on Sunday

Manchester United manager Louis van Gaal is not happy with Jose Mourinho's claims that the £120,000-a-week wages that 19-year-old Luke Shaw receives at Old Trafford would have "killed" Chelsea. Mail on Sunday

Van Gaal has had surveillance cameras mounted above the pitches at United's Carrington training ground so that he can review practice sessions in detail. Sunday Times (subscription required)

Arsenal midfielder Jack Wilshere, 22, has said sorry for smoking on holiday after the World Cup and admitted that he is running out of chances to prove himself on the pitch. Sunday Telegraph

Hart is one of four players to whom City are ready to offer new contracts - along with England midfielder James Milner, 28, Bosnia striker Edin Dzeko, 28, and Argentina forward Sergio Aguero, 26. Mail on Sunday

Fabio Borini's £14m transfer to Sunderland from Liverpool may have been held up by the 23-year-old's shoulder injury - and the Italian took to Twitter to express his frustration. He tweeted: "So bored in the hotel room waiting to fly back to England to recover as quick as possible."

Conference North side Hyde named several trialists in a pre-season friendly - and decided to replace their names on the teamsheet with socialist revolutionaries instead. Twitter

Arsenal warmed up for their pre-season friendly with New York Red Bulls on their first visit to the USA in 25 years - by playing football inside Grand Central Station. Twitter

Danny Welbeck, 23, struggles to name five of the starting line-up from Manchester United's FA Cup winning side of 1994 during a quiz - arguing: "I was only three years old at the time". Fox Sports

FA Cup bosses are struggling to find a lead sponsor for the competition - because of England's poor World Cup showing. Sun on Sunday (subscription required)