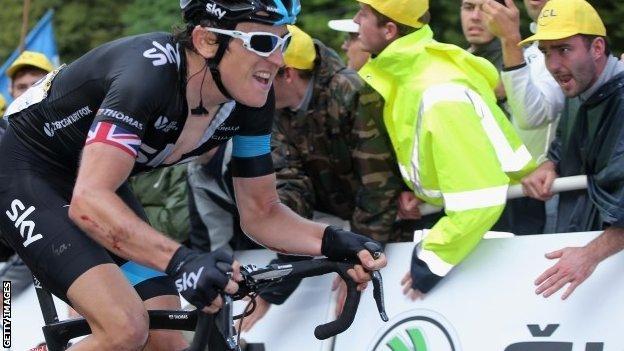 The 28-year-old Welshman, who joined the British-based team when they were formed in 2010, turned down offers "from two or three other teams".

He told BBC Sport: "I've been happy at Sky and this is the best place for me to develop in stage racing.

"It is good for your confidence knowing other teams want you. There were good offers but I feel at home with Sky."

Team Sky principal Sir Dave Brailsford added: "Team Sky has always been built around a strong British core, developing and nurturing home-grown talent to be the best they can be - and Geraint has been at the heart of that.

"Not only is he a strong character but he's one of a handful of world class riders that can do it all, whether that's on the climbs, flat, cobbles or time trials, which proves what a valuable member of the team he is.

"Over the last three weeks of the Tour de France Geraint has again underlined his qualities and has shown that he's an exceptional rider with an exciting future."

Thomas was the only British rider to finish this year's Tour and was 22nd overall, 59 minutes 14 seconds behind race winner Vincenzo Nibali.

He is scheduled to race in Thursday's individual time trial and Sunday's road race at the Commonwealth Games in Glasgow.

Thomas won gold on the track at the 2008 and 2012 Olympic Games but now concentrates on road racing.

He left Barloworld at the end of 2009 to join Sky and won the British national road race title in 2010.

A year later, he won his first professional stage race - the five-day Bayern-Rundfahrt in Germany - a race he won again earlier this year.

Thomas was a key rider in Sky's nine-man team that helped Chris Froome win the 2013 Tour de France and while he is keen to continue racing in the three-week Grand Tours, his main focus will be the week-long stage races in 2014.

"I am just thinking about races like Paris-Nice, and trying to get a good result in some of those," said Thomas, who was in contention to win the 2014 race before a crash on the penultimate stage ended his chances.

"The team is in a similar mindset to me. That's exciting and with the added confidence I've taken from this year's Tour, I can look forward to next season."