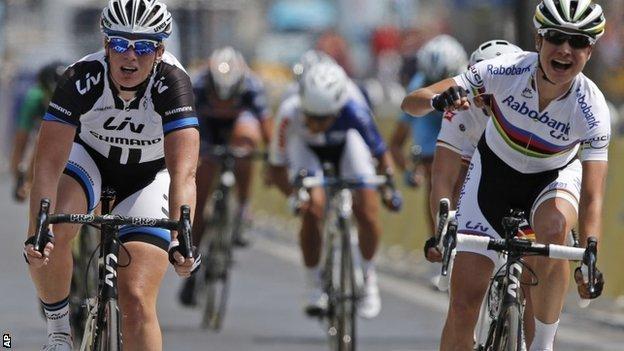 Vos outsprinted fellow Dutchwoman Kirsten Wild on the Champs-Elysees to take the title ahead of Canada's Leah Kirchmann in third after a 91km race.

Britain's Lizzie Armitstead had been in the leading bunch but was involved in a crash with French favourite Pauline Ferrard Prevot in the final kilometre.

The race finished ahead of Sunday's climax of the men's Tour de France.

Armitstead, who took silver in London 2012, was able to cycle to the finish line. She is next set to compete at the Commonwealth Games and is one of the favourites to win the road race on 3 August.

She tweeted: "Two bike changes and a crash, Paris you didn't deliver my romantic dreams! Going home with stitches but I'll be fine.

"Thank you to all Brits out on course. The Tour started in Leeds and I felt proud to race and see Yorkshire flags still lining the streets."

Leading women riders, including Vos and Britain's Emma Pooley, have been campaigning for the return of a stage race to be held in France and see La Course as the precursor to a longer event.

Pooley said: "This was the best opportunity for people all around the world to be able to see it."

A total of 119 riders started the 13-lap race that follows the same course that the men finish their three-week Tour on.

It was an aggressive race with constant attacks off the front of the peloton, including several by Armitstead who knew she may struggle in a sprint for the line, but all were nullified and the riders were all together with 5km remaining.

Vos's Rabobank-Liv team-mates took control of the pace-setting at the front of the peloton on the final lap and delivered the Dutch Olympic road race champion to the line, where she was too strong for sprint specialist Wild.

"It was already fantastic just to race here," said Vos. "That was a dream come true with the huge crowds.

"But it was also an incredible race with lots of attacks, and that makes it even better to win. The feeling is just amazing.

"I hope this got the attention that we all wished. I hope everybody feels the positive vibe that I feel now - that this is the start for more and lets have talks to grow the sport."