Manchester City manager Manuel Pellegrini would not give any details of the club's move for France centre-back Eliaquim Mangala, 23, from Porto, as it is not yet "100%". Manchester Evening News

Netherlands defender Stefan de Vrij is set for a £6.7m move from Feyenoord to Lazio, despite reports linking the 22-year-old with a switch to Manchester United. Daily Mail

West Bromwich Albion are set to announce the signing of Costa Rica right-back Cristian Gamboa, 24, from Rosenborg in a deal worth just under £2m, with manager Alan Irvine still chasing another striker. Birmingham Mail

Manchester United have been told they will have to pay £79m for Roma midfielder Kevin Strootman, 24, despite the Dutchman being sidelined with a cruciate knee ligament injury since March. Sun (subscription required) 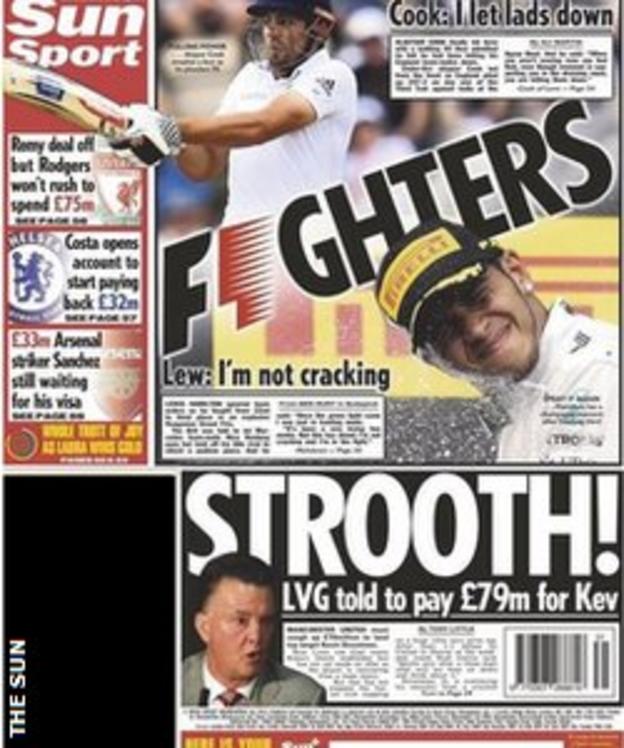 Belgium defender Jan Vertonghen, 27, says he will sign a new contract with Tottenham, despite interest from Barcelona. Daily Mirror

Real Madrid winger Angel Di Maria, 26, wants to join Manchester United as the £45m-rated Argentina international does not want to return to the Bernabeu and is frustrated by Paris St-Germain's attempts to secure a loan deal. Daily Star

However, Real Madrid coach Carlo Ancelotti expects Di Maria to be back at the European champions on 5 August. AS

Meanwhile, the transfer of Di Maria from Real Madrid to PSG could be announced next week in a £51m deal. Marca

Inter Milan will send a delegation to Southampton to finalise a deal for unsettled Italian striker Dani Osvaldo, 28, who cost the club £15m from Roma last summer. Daily Mail

Juventus will put in a transfer bid for Chelsea striker Romelu Lukaku to strengthen their attack but the Italian club face competition from Real Madrid for the 21-year-old Belgian forward. AS.com (in Spanish)

Barcelona's new defensive signing Jeremy Mathieu, 30, says he is ready to "give everything" to help his new team and prove himself worthy of Carles Puyol, his predecessor at the Nou Camp.L'Equipe (in French)

French side Bordeaux's Lamine Sane, 27, is on the transfer short-list of several English clubs, including Fulham. L'Equipe (in French)

Barcelona have announced the signing of Brazilian winger Ferrao, 24, from Russian side Tyumen. Mundo Deportivo (in Spanish)

Prime Minister David Cameron has refused to join his deputy Nick Clegg in calling for Russia to be stripped of the 2018 World Cup. Times (subscription required)

Arsenal's new forward Alexis Sanchez, 25, is set for a lonely start to his Gunners career as the Chile international will report for training in the UK after the club have left for their pre-season camp in Austria. Daily Mail

Germany international Kevin Grosskreutz, 26, unveiled his brand new World Cup trophy tattoo on his Instagram page, despite not playing a single minute at the tournament.

Former Barcelona midfielder Cesc Fabregas, 27, celebrated his first game for Chelsea - a 2-1 friendly win over Olimpija Ljubljana - by tweeting a picture of himself with fellow new boy Diego Costa and the word 'debut'.

Bayern Munich's 3-0 friendly win over Wolfsburg in the Telekom Cup final was halted by a pitch invader who wanted to take a selfie with midfielder Javier Martinez. Metro

Brazil and Barcelona forward Neymar, 22, whose World Cup was ended early with a back injury, has been pictured on his holidays in a pair of white trunks and a medical corset. Marca