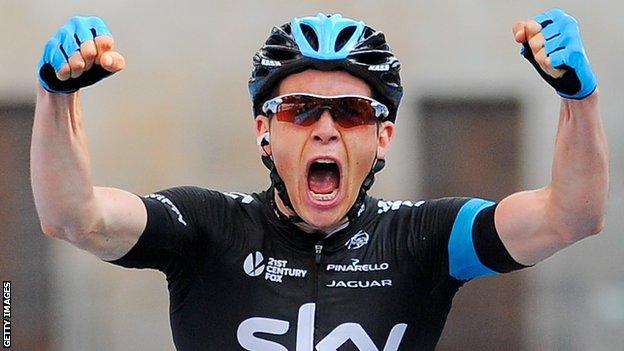 Four of Britain's leading cyclists will race in the Prudential RideLondon-Surrey Classic race on 10 August.

Scotland's David Millar has entered in his final season of road racing, while Ben Swift and 21-year-old twin brothers Simon and Adam Yates will also compete.

They face competition from Philippe Gilbert, Belgium's 2012 world road race champion, who races in Britain for the first time since the 2012 Olympics.

The 200km race will be covered live on BBC1 and the BBC Sport website.

Laura Trott, Lizzie Armitstead and Marianne Vos are scheduled to race in the RideLondon Women's Grand Prix on 9 August.

Millar was overlooked for this year's Tour de France by Garmin-Sharp for health concerns, and will be joined in London by Irish team-mate Dan Martin, who is making a return to racing after a crash in the Giro d'Italia in May.

Swift was a top-10 finisher in last year's event while Simon Yates made a big impression in his Tour de France debut this year with two breakaways in mountain stages.

His brother Adam, who won the Tour of Turkey earlier this summer, will be riding in one of his final events before making his Grand Tour debut at the Vuelta a Espana which starts on 23 August.

The 2014 route includes multiple circuits in the Surrey Hills, sections of the 2012 Olympic Road Race route and finishes on The Mall.