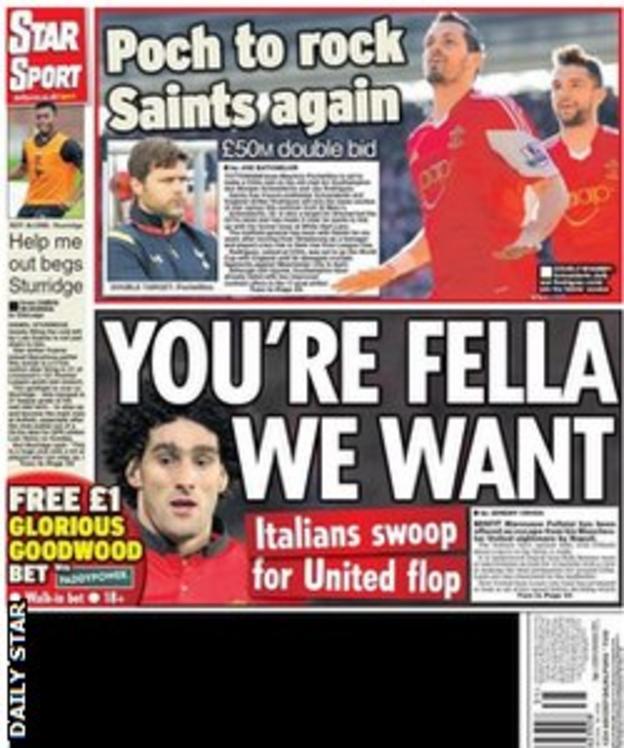 West Ham are the latest club to be linked with France midfielder Mathieu Valbuena. The Hammers are rivals to QPR in a £6.5m bid for the 29-year-old Marseille player. Guardian

Manchester United midfielder Marouane Fellaini, who joined the club for £27.5m from Everton last summer, could be on his way out of Old Trafford after the 26-year-old and his agent held talks with Napoli chief Riccardo Bigon. Daily Express

United are also ready to allow Japan midfielder Shinji Kagawa, 25, to leave the club, with Borussia Dortmund ready to take back the player they sold to the Red Devils in 2012. Independent

United boss Louis van Gaal says winger Wilfried Zaha, 21, will have to adapt to a striking role if he wants to figure in his first-team plans. Manchester Evening News

However, Saints face competition from West Ham, who are close to signing Jenkinson on loan after holding talks with the once-capped England international. Daily Mirror

Sporting Lisbon right-back Miguel Lopes, 27, is set to join Tottenham Hotspur on loan, with a view to a permanent move. Daily Mail

But Newcastle United could attempt to take Remy back on loan to St James' Park, where he scored 14 goals in 26 league appearances last season. Goal.com

Aston Villa manager Paul Lambert has made a move to sign Chelsea winger Victor Moses, 23, on loan and will step up his bid to sign Ki Sung-yueng, 25, from Swansea City this week. Daily Telegraph

Former Chelsea striker and free agent Samuel Eto'o has been offered to West Ham as they look for cover for injured striker Andy Carroll, but the 33-year-old is understood to want £100,000 a week. Daily Mail

Chile midfielder Gary Medel wants Cardiff to allow him to move to Inter Milan even though Turkish club Galatasaray have offered more money for the 26-year-old. Daily Mirror

Juventus director general Beppe Marotta says the club are keen to hold on to Arturo Vidal, dismissing rumours of the 27-year-old Chile midfielder moving to Chelsea. Tuttosport (in Italian)

Dejan Lovren's move to Liverpool has paved the way for defender Daniel Agger to make a surprise £12m move to Barcelona. Sport (in Spanish)

Southampton are considering making a move for Sporting Lisbon defender Marcos Rojo, 24, following the exodus of several players from the club. Le Figaro (in French)

Levante's 27-year-old Costa Rica goalkeeper Keylor Navas is growing impatient at the lack of news coming from Real Madrid regarding a possible transfer offer from the Bernabeu club. AS.com (in Spanish)

Italian side Lazio have announced they are bringing Netherlands and Feyenoord defender Stefan de Vrij, 22, to Rome. L'Equipe (in French) 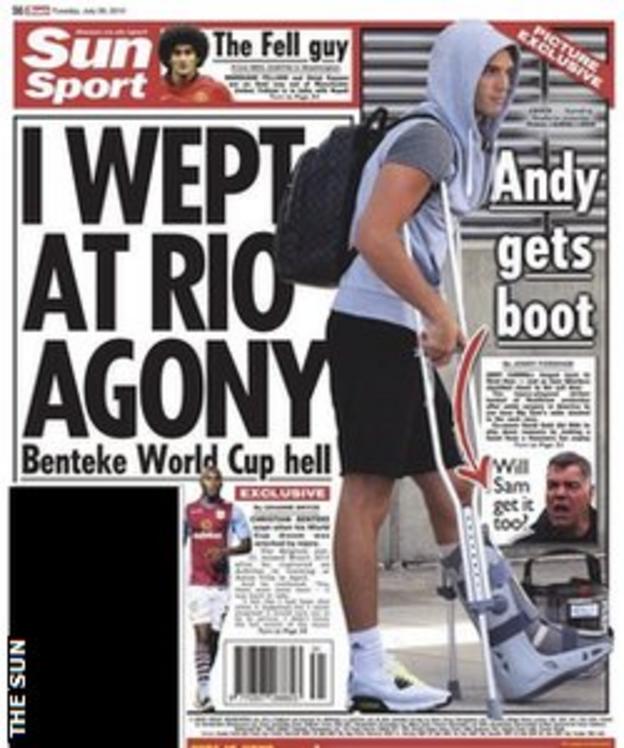 The Football Supporters' Federation wants fans to join forces and take part in a march on the Premier League and Football League headquarters in protest at rising ticket prices. Guardian

Arsenal's French midfielder Abou Diaby, 28, is confident he can establish himself at the club this season after enduring 39 injury and fitness lay-offs since joining the Gunners from Auxerre in 2006. Independent

Aston Villa's Belgium striker Christian Benteke, 23, has revealed that he cried when he was ruled out of the 2014 World Cup because of a ruptured Achilles tendon in training. Sun (subscription required)

Manchester United manager Louis van Gaal says he will not get drawn into any mind games with "friend" and Chelsea boss Jose Mourinho. Daily Express

Veteran defender Rio Ferdinand, 35, says only the lure of Queens Park Rangers and working with manager Harry Redknapp again stopped him retiring after his contract at Manchester United expired this summer. Talksport

Real Madrid manager Carlo Ancelotti is expecting Welshman Gareth Bale, who scored 22 goals in 44 appearances last season, to have an even greater impact in his second campaign in Spain.Bein Sports

Former Southampton striker Mick Channon has questioned the decision of 19-year-old defender Calum Chambers to leave Saints and join Arsenal, claiming it highlights everything that is wrong with the modern footballer. Talksport

Southampton manager Ronald Koeman took to Twitter - in what could be seen as poking fun at the club's lack of personnel - after Calum Chambers joined Rickie Lambert, Adam Lallana, Dejan Lovren and Luke Shaw in heading out of the club, posting a picture of an empty pitch and the words: "Ready for #Training!"

Italian third-tier side US Catanzaro have re-signed former Premier League forward Diomansy Kamara, 13 years after the 33-year-old left the club, following a successful Facebook campaign from the fans.