Highly-rated winger Oscar Borg, 16, is set to snub West Ham and join Manchester United where he has been on trial. Daily Mail

West Ham and QPR appear to have missed out on France midfielder Mathieu Valbuena, 29, who has decided after all to join Dynamo Moscow. L'Equipe (in French)

Sunderland are in talks with Lazio over Belgium defender Luis Pedro Cavanda after failing to reach an agreement with Fiorentina's Marcos Alonso, also 23, who spent last season on loan at the Stadium of Light. Daily Mail

Manchester United and Barcelona are still in the hunt for Fiorentina's Juan Cuadrado, 26, but could be put off by the £32m asking price for the Colombian midfielder. Marca (in Spanish)

The Old Trafford club have reached a verbal agreement with Juventus midfielder Arturo Vidal, 27, over a transfer deal worth £47m. Tuttosport (in Italian)

Manchester City's hopes of signing Moroccan defender Mehdi Benatia, 27, have diminished after Roma dismissed any chance of a transfer. Le Figaro (in French)

Chelsea are planning to reward their fans by offering ticket discounts and travel subsidies to away games outside London. Evening Standard

Dejan Lovren, 25, Liverpool's new £20m signing from Southampton, has been unable to join up with his team-mates on tour in the USA because of a delay in his visa. Independent

Chelsea forward Eden Hazard, 23, says criticism of his performances for Belgium during the World Cup in Brazil was justified but he hopes to be back to his best at Stamford Bridge this season. sudinfo.be (in French)

Liverpool are about to start work on the £260m redevelopment of Anfield after derelict houses adjacent to the main stand were finally demolished. Daily Mirror

Liverpool midfielder Steven Gerrard, 34, says he has had the worst three months of his life, losing out on the Premier League title, exiting the World Cup early with England and retiring from international football. Daily Telegraph 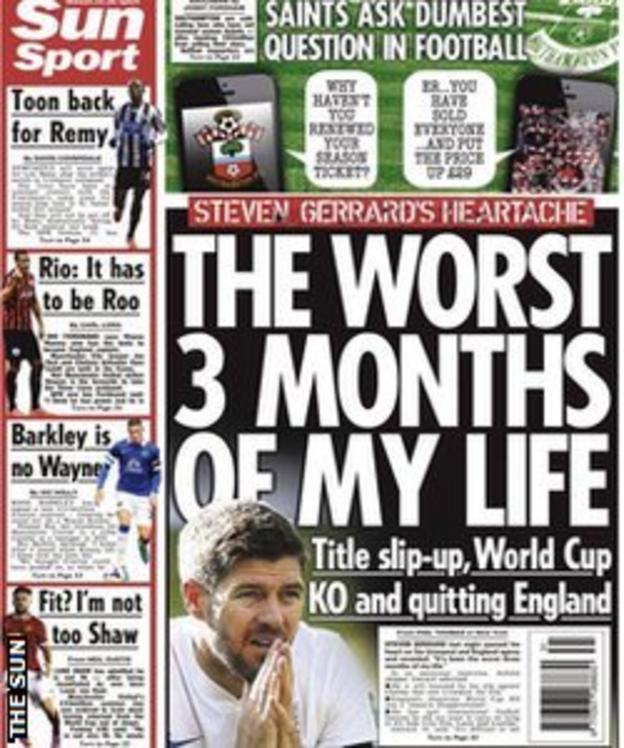 New manager Louis van Gaal has warned Manchester United supporters his side may struggle for the first three months of the season as the players adjust to his methods. Times (subscription required)

Van Gaal says if United can beat neighbours Manchester City to the title next season, the triumph will be all the more special. Manchester Evening News

Manchester City midfielder Yaya Toure, 31, says he could stay at the club for the rest of his career. Guardian

New Barcelona striker Luis Suarez, 27, who is banned from all footballing activities for four months, has moved to the Pyrenees to begin his pre-season regime with a personal trainer. Daily Mail

Didier Drogba, 36, has backed his new Chelsea team-mate and fellow striker Diego Costa, 25, to make an instant impact in the Premier League after his £32m move from Atletico Madrid.Sun (subscription required)

West Ham owner David Gold has apologised to Sam Allardyce after accidentally 'favouriting' a supporter's tweet calling for the manager to be sacked. Sun (subscription required)

Brazilian forward Robinho, 30, is in the middle of negotiations with AC Milan about his future. Le Figaro (in French)

Argentina's Alejandro Sabella has cited "lack of energy and the need to rest" as reasons for his decision to resign as the manager of the national side, while former Brazil coach Felipe Scolari has found himself a new job in charge of local side Gremio Porto Alegre. Bild (in German)

Atletico Madrid have not yet given up their pursuit of Arsenal midfielder Santi Cazorla, 29, Chelsea striker Fernando Torres, 30, and PSV Eindhoven winger Zakaria Bakkali, 18. As.com (in Spanish)

Liverpool-target midfielder Xheridan Shaqiri, 22, could turn down the Anfield club and stay on at Bayern Munich. Tuttosport (in Italian)

Liverpool and England striker Daniel Sturridge, 24, showed off his singing skills with a performance of Drake's Too Much, accompanied by team-mate Jordan Ibe on YouTube.

Chelsea are refusing to print shirts with the names of goalkeeper Thibaut Courtois, 22, or striker Romelu Lukaku, 21, on the back as neither player has been given a squad number. Daily Star