Liverpool will renew their interest in 22-year-old Spain left-back Alberto Moreno, who is valued at £20m, after missing out on on Ryan Bertrand to Southampton. Daily Mail

Mexico international Hernandez admits he is unsure whether he will remain at Old Trafford next season, saying "only God knows" about his future. Guardian

Tottenham are expected to return with an improved offer for Southampton midfielder Morgan Schneiderlin despite Saints' insistence the 24-year-old will not be allowed to leave. Times (subscription required)

Spurs are poised to sign Sporting Lisbon's England Under-21 defender Eric Dier for £4m after the 20-year-old turned down a new deal with the Portuguese club. Daily Telegraph

Arsenal's bid to sign Sami Khedira, 27, could be back on as Real Madrid want to sell the German World Cup midfielder this summer and Bayern Munich will not buy until next year.Daily Mirror

Newcastle United's hopes of signing Lyon striker Alexandre Lacazette, 23, for about £10m have hit a snag as the Frenchman looks set to sign a new contract with the Ligue 1 club. Newcastle Chronicle 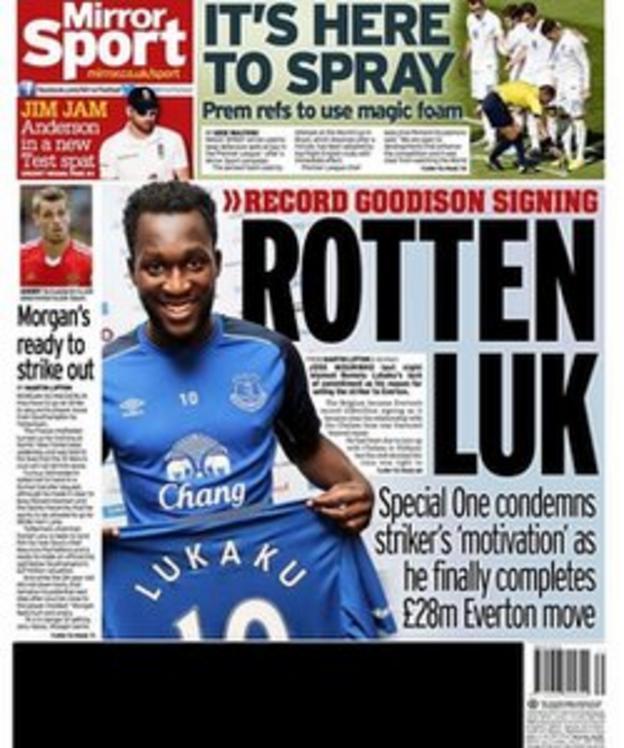 Chelsea manager Jose Mourinho says Romelu Lukaku, 21, was "not motivated" to fight for his place at Stamford Bridge after the striker completed a £28m move to Everton. Daily Mirror

Liverpool captain Steven Gerrard, 34, admits he told Luis Suarez, 27, not to sign for Arsenal last summer because the Uruguay forward was "too good for them". Times (subscription required)

Manchester United's American owners, the Glazer family, are set to raise about £87m by selling eight million shares in the club on the New York Stock Exchange. Daily Mail

Liverpool's new £20m Croatian defender Dejan Lovren, 25, has been forced to train with the club's youngsters after a visa mix-up during the Reds' US tour. Independent

Arsenal's Theo Walcott posted a picture of himself alongside new signing Alexis Sanchez on Twitter, along with the message "Watch out Premier League. Me and Alexis Sanchez will be a deadly force!! #afc #COYG #SpeedMatters."

Midfielder Juan Mata, 26, saw the funny side when he was listed as Wayne Rooney in Manchester United's starting XI against Inter Milan on tour in the USA and tweeted the TV graphic.

A picture of new Roma defender Ashley Cole lingering awkwardly on the edge of the team photo has spawned a spate of 'lurking' memes on social media. Bleacher Report