Manchester United are closing in on a £20m move for Germany World Cup winner Mats Hummels, 25, with Borussia Dortmund hoping to replace the defender with Liverpool's 21-year-old Tiago Ilori in a loan deal. Daily Mirror

Samuel Eto'o has priced himself out of a move to West Ham. The 33-year-old former Chelsea striker, now a free agent, had asked for a salary of £120,000-a-week to go to Upton Park. Daily Mirror

Napoli president Aurelio De Laurentiis has confirmed the Italian club's interest in Manchester United midfielder Marouane Fellaini, 26, although he is not the only name on his list. Daily Telegraph

Manchester City midfielder James Milner, 28, is keeping the club waiting over signing his new contract as he weighs up his future at the Premier League champions. Independent

Sunderland manager Gus Poyet says striker Connor Wickham, 21, could be sold if he does not sign a new contract. Sunderland Echo

Burnley are waiting to hear from West Brom after they submitted a third bid for Baggies defender Craig Dawson, 24. Burnley Express 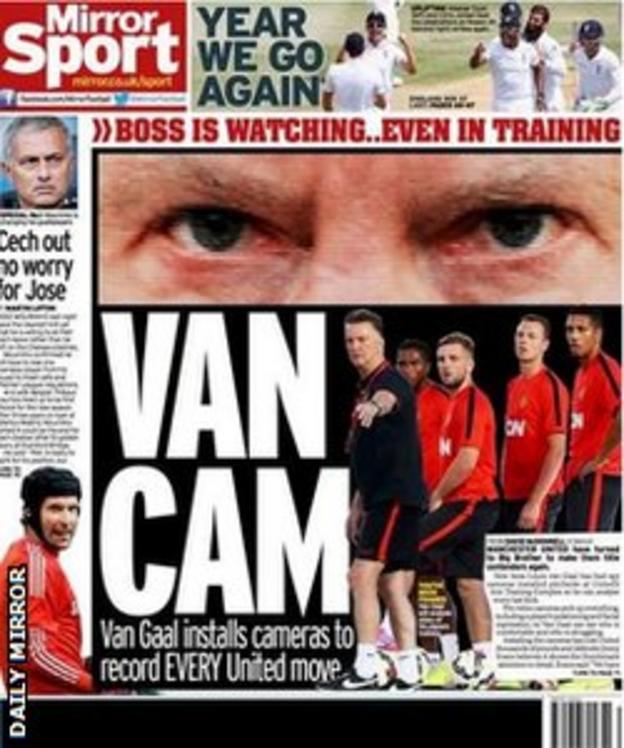 Manchester United's Dutch manager Louis van Gaal, 62, has had HD cameras installed at the club's Carrington complex so he can analyse every detail of training. Daily Mirror

United defender Jonny Evans, 26, says the cameras are already being used on the club's tour of the United States: "The manager is saying: 'You should be five yards to the right.' We went though a video last night and I was 10 yards out." Daily Mail

Reflecting on his Everton career ahead of his testimonial on Sunday, midfielder Leon Osman, 33, says it took time for his technical ability to be recognised. Guardian

Stoke boss Mark Hughes is hoping to get the best out of new signing Bojan Krkic by urging team-mates and fans to throw a caring arm around the 23-year-old forward. Daily Star

Chelsea goalkeeper Thibaut Courtois, 22, who is back at the club after spending three years on loan with Atletico Madrid, says he wants to learn from Petr Cech as the duo begin their battle for the number one spot. Daily Mail

Manchester United defender Jonny Evans believes this is a key time in his career as he looks to step up as the senior centre-back following the exits of Rio Ferdinand and Nemanja Vidic. Guardian

Hatem Ben Arfa has endured an "unfair and humiliating" summer at Newcastle but may out-stay manager Alan Pardew, according to his agent. ESPN

Spanish football club Cultural Leonesa caused a stir on Twitter after posing for their 2014-15 Segunda Division B team photo in their new tuxedo-inspired kit.

Arsenal midfielder Mesut Ozil, 25, took time out from Arsenal's tour of the USA to practise a bit of basketball with Chicago Bulls point guard Derrick Rose, as he revealed on Twitter.

Francesco Totti has welcomed Ashley Cole into the Roma squad by mocking the defender following his awkward photo with his new team-mates, in which the ex-Chelsea full-back is seen standing separate from the rest of the squad. Metro

Norwegian minnows FL Fart have been left about £375,000 (4m krone) after 91-year-old fan Erling Andreassen left his possessions - including his property - to his boyhood club. Ha (in Norwegian)