Real Madrid forward Cristiano Ronaldo, 29, has not ruled out the possibility of returning to Manchester United. Manchester Evening News

Barcelona and Brondby are considering making a move for Liverpool's Danish centre-back Daniel Agger, 29, who is considering his future at Anfield following the arrival of £20m defender Dejan Lovren from Southampton. Daily Mail

Arsenal may make a move to sign former Liverpool defender Alvaro Arbeloa, 31, from Real Madrid if Thomas Vermaelen, 28, leaves the Emirates Stadium. AS (in Spanish)

Manchester United are ready to sign Vermaelen for about £12m, despite the fact the centre-back is suffering from a minor hamstring injury he picked up with Belgium during the World Cup. Guardian

Liverpool have suffered a setback in their pursuit of Paris St-Germain's 29-year-old forward Ezequiel Lavezzi, with the Argentina international preferring a move to Juventus. Daily Express

Newcastle boss Alan Pardew says he has given up his attempt to sign QPR's 27-year-old striker Loic Remy. Newcastle Chronicle

West Ham are lining up a move for Stoke City striker Peter Crouch, 33, as they look to bolster their attacking options after Samuel Eto'o priced himself out of a move to Upton Park. Daily Star

Liverpool are lending Manchester United a helping hand in their pursuit of Borussia Dortmund defender Mats Hummels, 25, with the Reds willing to let 21-year-old Portuguese defender Tiago Ilori move to the Bundesliga on loan to replace the German. Daily Star

Everton and Norwich City are both keen to sign Ostersunds FK's Gambian striker Modou Barrow, 21, according to his agent Willie McKay. Sky Sports

Tottenham are in talks to sign Villarreal's £21m-rated Argentine defender Mateo Musacchio, 23, who has previously been linked with Barcelona. Daily Mirror 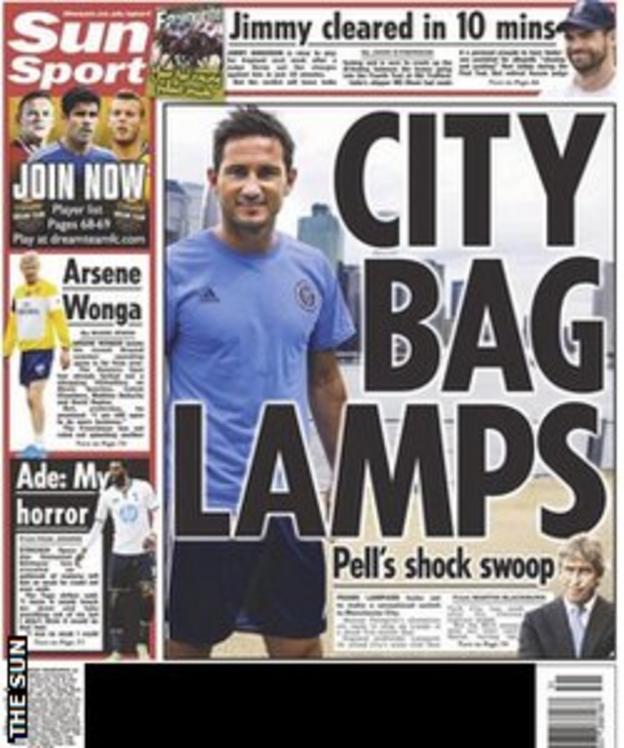 Tottenham striker Emmanuel Adebayor, 30, will begin his pre-season training on Saturday but says he was so weak after contracting malaria in June he could not even walk. Sun (subscription required)

Arsenal manager Arsene Wenger has predicted a tighter title race this season after claiming that Financial Fair Play will have an impact on Arsenal's rivals. Times (subscription required)

Atletico Madrid's £24m signing from Real Sociedad, Antoine Griezmann, took time out from his own presentation at the Vicente Calderon to tweet a selfie in front of his new fans.

Arsenal forward Theo Walcott, 25, took to Twitter to warn their Premier League rivals to "watch out" after witnessing new signing Alexis Sanchez, 25, in his first training session since joining from Barcelona, adding: "Will be a deadly force!! #afc #COYG #SpeedMatters"

Real Madrid coach Carlo Ancelotti put his players through their paces in a game of American Football on Friday, with Xabi Alonso and Sergio Ramos showing off their skills, or lack of them, at Eastern Michigan's training facilities.Metro

Barcelona's Argentina forward Lionel Messi, 27, is going 'Canarinho' next season, with his yellow boots serving as "a monument to every goal, record and trophy" he has won in his career. Marca