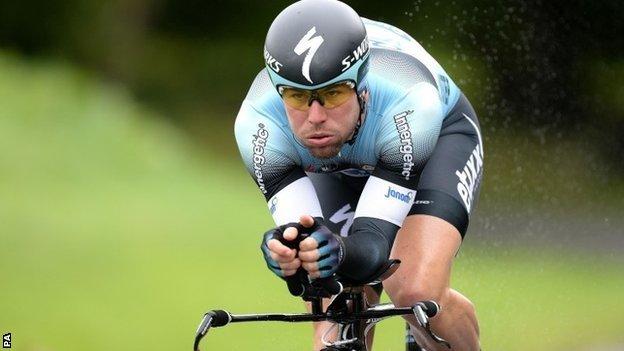 Mark Cavendish will contest this month's Tour de l'Ain in what will be his first race since crashing on the opening stage of the Tour de France.

The Brit dislocated his shoulder and suffered ligament damage in a crash near the end of the first stage of the Tour and subsequently had surgery.

"The Tour de l'Ain will be important to see where I am at with my training," said Cavendish.

The five-day stage race in eastern France starts on 12 August.

Cavendish, who will miss this weekend's Ride London Classic, added: "The rest of my programme will be decided 100% after Tour de l'Ain depending on how I feel during that race.

"Together with the team we will then discuss how to approach the rest of my season.

"Unfortunately I am not able to participate in the Ride London Classic, which is an amazing race.

"With the two races being so close together on the calendar, I need to focus on completing my specific block of training in Italy before returning to competition at the Tour de l'Ain."

If the Omega Pharma - Quick-Step rider comes through the race without injury, he is expected to compete in the Vuelta a Espana, the third and final Grand Tour of the year, which starts on 23 August.