Arsenal will have to replace more than 100 seats after Galatasaray fans caused damage during the Gunners' 4-1 Champions League victory on Wednesday. (Daily Mirror) 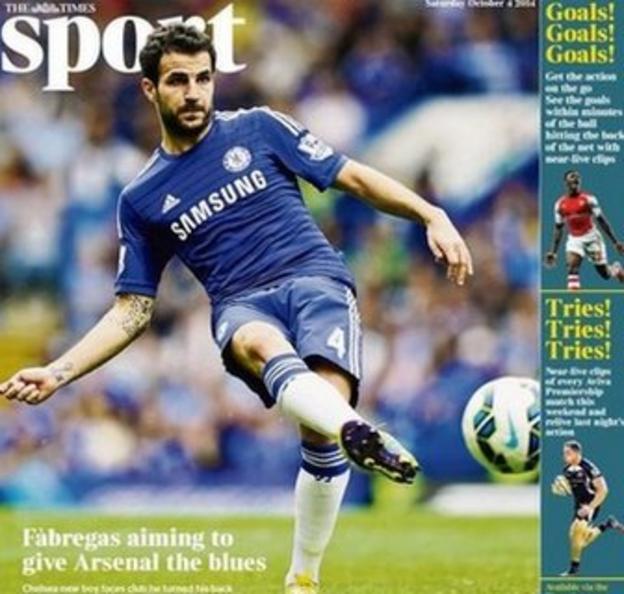 Liverpool striker Daniel Sturridge, 25, who signed a new five-year deal with the club on Friday, has said he wants to become an actor once his football career is over. (Esquire)

England assistant coach Gary Neville says Chelsea's Cesc Fabregas has elevated himself into an elite group of player and will be the architect of the club's success. (Daily Telegraph)

Toulouse have taken a novel approach to trying to contain Paris Saint-Germain striker Zlatan Ibrahimovic - by sending him presents on his 33rd birthday. (Reuters)

Former Newcastle midfielder Yohan Cabaye has come out in defence of his former manager Alan Pardew, suggesting that Newcastle players should share the blame for the team's predicament. (Guardian)

Jimmy-Floyd Hasselbaink, Malky Mackay, Brian McDermott and former manager Owen Coyle are among those linked with the managerial vacancy at Bolton following the departure of Dougie Freedman. (Daily Express)

Former Arsenal Ladies assistant coach Emma Hayes said a clairvoyant helped her decide to take over at Chelsea Ladies, who are on the brink of winning their first Women's Super League title. (Guardian)

A broken down bus on the M6 caused a stir on Twitter. North West Motorway Police tweeted: "Cheshire NWMPG have just help remove a broken down coach from the M6 S/B J19-J18. This was the Wigan FC team bus (not joking)..."

The Times (subscription required) has a double page spread from The Official Autobiography of Roy of the Rovers by Roy Race, which is published on 9 October, "extracted with permission from Roy".

Former Sunderland and Middlesbrough midfielder Julio Arca, 33, has been paying £3.50 to play for second division pub side Willow Pond FC. The Argentine made 177 appearances for Sunderland before joining Middlesbrough.(Daily Mail)

A new survey has found that Liverpool are everybody's favourite second team, with football fans saying the Anfield club are the least offensive side to follow in England. (Metro)