Liverpool and Arsenal are monitoring Real Madrid goalkeeper Iker Casillas after the 33-year-old hinted he wants to play in England. (Daily Star)

However, reports claim Liverpool are closing in on a deal for former Barcelona goalkeeper Victor Valdes, 32, who is set to undergo a medical this month. (Goal.com)

Liverpool midfielder Suso, 20, will leave Anfield to join AC Milan either in January or for free during the summer. (Daily Express)

Real Madrid are set to make a bid for Chelsea's Brazilian midfielder Ramires 27, in the January transfer window. (Talksport)

Chelsea goalkeeper Petr Cech, 32, will look to quit Stamford Bridge in the near future if he remains second choice to 22-year-old Thibaut Courtois. (Sky Sports)

Stromsgodset midfielder Martin Odegaard, 15, has courted the attention of several Premier League clubs but Norway coach Per-Mathias Hogmo, who has included the teenager in his squad for his side's forthcoming Euro 2016 qualifiers, has urged him to turn down a move to "an absolute top club". (Daily Mail)

Chelsea, Liverpool, Manchester City and Manchester United are all interested in 31-year-old Barcelona right-back Dani Alves, whose contract with the Spanish club runs out next summer, but the Brazilian wants to stay at the Nou Camp outfit.(Daily Star)

Southampton midfielder Morgan Schneiderlin, 24, says the club treated him like "cattle" during the summer when he was denied a move to Tottenham, but that he now intends to stay at the south coast side for the rest of the season. (Daily Telegraph)

Premier League fixtures could be played overseas within five seasons. The possibility of a new plan is on the agenda, six years after chief executive Richard Scudamore's controversial '39th game' proposals were dismissed. (The Times - subscription)

Arsenal defender Calum Chambers, 19, is set to make his senior competitive debut for England in Thursday's Euro 2016 qualifier against San Marino and may even earn a surprise start at centre-back. (Guardian)

Manchester United defender Paddy McNair, 19, has added to the Red Devils injury woes, after picking up a hamstring injury that will rule him out for three weeks. (Daily Mirror)

Liverpool midfielder Adam Lallana, 26, has rejected suggestions he would have refused to play for Southampton if they had blocked his £25m transfer to Anfield. (Independent) 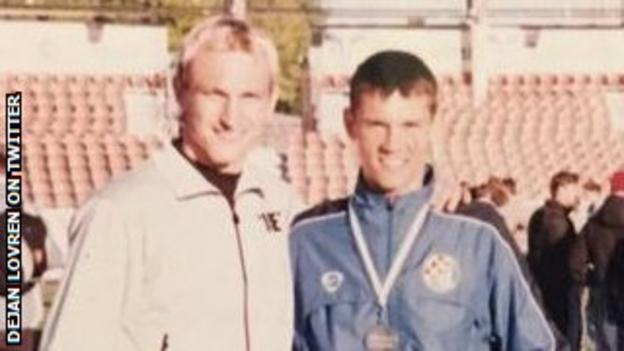 Brighton manager Sami Hyypia celebrated his 41st birthday on Tuesday and received a reminder of his younger days from current Liverpool defender Dejan Lovren, 25, who took to Twitter to post an old snap of he and Hyypia from 2003 when the Croatian defender was just 14 years old.

Roy Keane has revealed he didn't sign Robbie Savage when he was Sunderland manager because the midfielder's voicemail message was 'Hi, it's Robbie - whazzup!'. (Daily Mail)