Manchester United have been told that Aston Villa captain and centre-back Ron Vlaar, 29, will cost them upwards of £12m, but face stiff competition from Arsenal. (Daily Express) 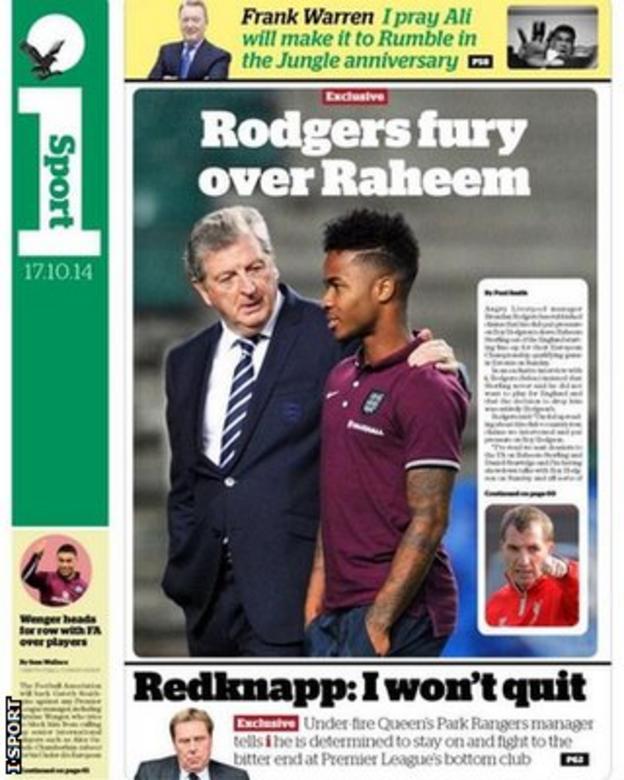 Spanish champions Atletico Madrid have recruited former Manchester United and Chelsea chief executive Peter Kenyon as an advisor, with a remit to expand the club's international presence. (AS)

Millwall will wear a camouflage kit when they play Brentford on Remembrance weekend, after getting special permission from the Football League to raise money for a rehabilitation centre that treats injured members of the armed forces. (Sun - subscription required)

Former Newcastle, Birmingham and Norwich boss Chris Hughton, 55, heads a three-man shortlist to be the next boss of Championship strugglers Fulham, with caretaker-manager Kit Symons, 43, and Steve Clarke, 51, also in the frame. (Daily Mirror)

Arsenal midfielder Alex Oxlade-Chamberlain, 21, wants to play for England in the European Under-21 Championship, despite being capped 18 times at senior level. (Times - subscription required)

Liverpool's 19-year-old winger Raheem Sterling will play for England in next summer's tournament - if the Football Association and Anfield club can come to an agreement. (Daily Mail)

Sterling, who told Roy Hodgson he was too tired to play for England, has performed more sprints, over a greater distance and reached a higher top speed than Premier League rivals such as Manchester City's David Silva and Chelsea's Eden Hazard so far this season. (Daily Mirror) 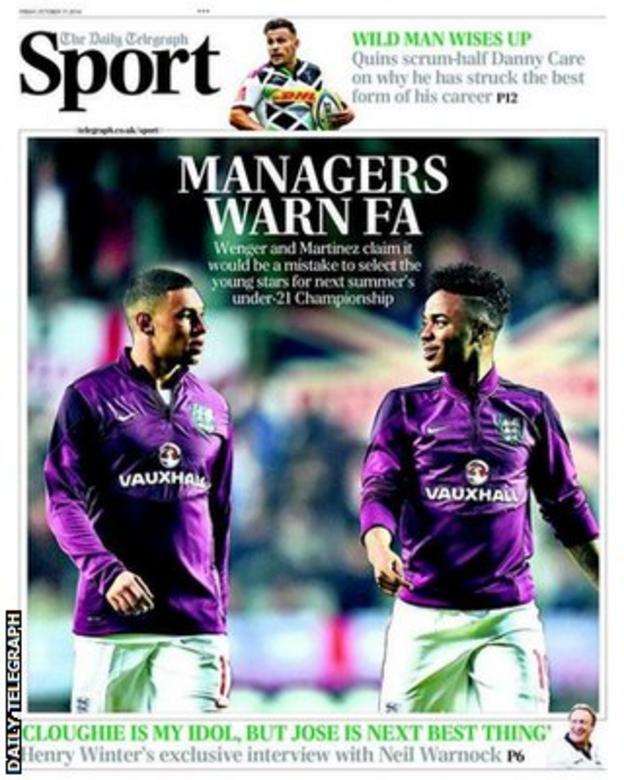 Uefa president Michel Platini has called for the introduction of a white card for players who show dissent towards referees, which would lead to a 10-minute sin-bin. (The Guardian)

Liverpool's £16m striker Mario Balotelli, 24, has blamed manager Brendan Rodgers's tactics for the fact he has scored just one goal since his arrival from AC Milan in the summer. (Independent)

Poland skipper Robert Lewandowski, 26, remains angry at a challenge by Scotland defender Gordon Greer, 33, during the 1-1 Euro 2016 qualifier between the countries, saying he will "repay" what happened to him in the return match. (Daily Record)

Professional Footballers' Association trustee Brendon Batson has called on the 20 Premier League chairmen to address racial discrimination in English football by coming up with an alternative to the Rooney Rule. (Guardian)

Arsenal wanted to sign Lionel Messi, Gerard Pique and Cesc Fabregas, all 27, when the trio were teenagers at Barcelona's academy. (Daily Star)

Aston Villa and England midfielder Fabian Delph, 24, is almost certainly out of Saturday's game at Everton - and may require surgery on the shoulder he injured in a training-ground accident. (Times - subscription required)

Barcelona defender Pique has tweeted an apology following a verbal confrontation with police in Spain.

Arsenal midfielder Oxlade-Chamberlain could be set for an uncomfortable time the next time he bumps into his noisy neighbour after tweeting: "My neighbour drives me mad! The guy persists on mowing his lawn and chopping trees down morning noon and night, EVERY DAY! Just chill man!"

British football fans will miss the first 15 minutes of El Clasico between Real Madrid and Barcelona on Saturday, 25 October, when Luis Suarez is expected to make his return to competitive football, because of UK broadcasting rules. (Independent)

Leyton Orient players have agreed to feature in a reality show on Italian TV after backing down in a row with the League One club's new Italian owner, Francesco Becchetti. (Metro)