Arsenal and Manchester City are in the market for Leicester's England Under-21 defender Liam Moore, 21. (Sun - subscription required)

Manchester United could renew their interest in midfielder Fredy Guarin after Inter Milan put the 28-year-old up for sale. (Daily Star)

Bundesliga side Schalke are poised for a shock January move for Chelsea striker Fernando Torres, who is currently on loan at AC Milan. Schalke boss Roberto Di Matteo is keen to work with the 30-year-old again after his time in charge of the Blues. (Bild)

Arsenal and Chelsea's hopes of signing Barcelona's teenage attacker Munir El Haddadi are fading with the Spain international, 19, set to commit his future to the Nou Camp. (Daily Express)

Manchester City boss Manuel Pellegrini blamed the cold weather as his side threw away a two-goal lead to draw 2-2 in their Champions League Group E match against CSKA Moscow played behind closed doors on Tuesday in sub-zero temperatures. (Independent)

Luke Shaw, 19, Manchester United's £27m left-back signing from Southampton, says fans have yet to see the best of him after a slow start to his career at Old Trafford. (Guardian)

Chelsea are running out of strikers to face Manchester United in the Premier League on Sunday after Loic Remy was injured 16 minutes into Tuesday's Champions League win against Maribor. Diego Costa has already been ruled out, leaving veteran Didier Drogba, 36, as manager Jose Mourinho's only recognised front man. (Daily Telegraph)

Swansea boss Garry Monk, 35, has revealed he fines his players for diving - in training. (Daily Mirror)

Sunderland manager Gus Poyet has refused to take the blame for Saturday's humiliating 8-0 defeat at Southampton, saying he is not responsible for the strength of the team. (Daily Mail)

Arsenal will try to recruit current Real Madrid boss and former Chelsea manager Carlo Ancelotti if Arsene Wenger accepts a lucrative offer to take charge of Monaco at the end of the season. (Daily Express)

QPR could fine manager Harry Redknapp for his part in a public falling out with playmaker Adel Taarabt, 25.(Daily Telegraph) 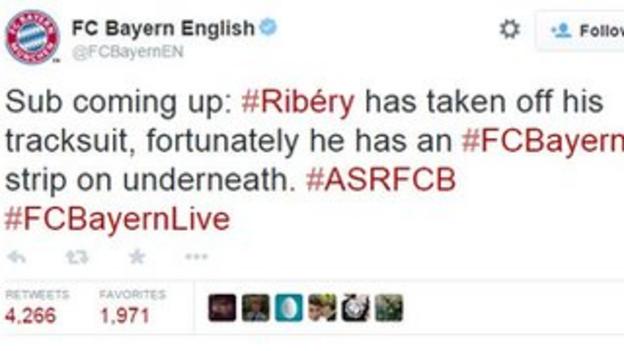 ...only for the Baggies to shoot back with a reference to the division's difference between the two clubs' standings in English football.

Real Madrid manager Carlo Ancelotti has posed for a snapshot in front of Liverpool's famous This is Anfield sign.

Arsenal are ready to offer £32 million for Mats Hummels but Borussia Dortmund are unlikely to let go of the 27-year-old German defender.(Bild - in German)

Former Arsenal striker Thierry Henry could return to French football as both Paris St-Germain and AS Monaco are interested in the 37-year-old forward. (Lefigaro - in French)

Tottenham have loaned out their 19-year-old Swiss defender Milos Veljkovic to Middlesbrough until January next year. (L'equipe - in French)

Former Liverpool and current Real Madrid defender Alvaro Arbeloa, 31, says a lot has changed at Anfield since he left the club five years ago. (Marca - in Spanish)

Kieron Dyer has revealed that a withering assessment of Lee Bowyer's playing ability started their infamous fist-fight when Newcastle lost at home to Aston Villa in 2005. (Newcastle Evening Chronicle)

Cristiano Ronaldo and his Real Madrid team-mates were drenched by torrential rain as they attempted to warm-up at Anfield ahead of training on Tuesday. (Liverpool Echo)