Tottenham will rival neighbours Arsenal in the chase for Birmingham winger Demarai Gray, 18. (The Sun, subscription only)

Stuttgart defender Antonio Rudiger, 21, has dealt a blow to Chelsea's hopes of signing him by revealing he is an Arsenal fan. (Metro)

Newcastle United's board members say there is "no guarantee" that they will sign a striker in the January transfer window. (Newcastle Chronicle)

Former Liverpool striker Dirk Kuyt, now at Turkish side Fenerbahce, is a target for Southampton in the January transfer window. (Daily Star)

Lukas Podolski has hinted he may leave Arsenal. The 29-year-old German forward is frustrated with a lack of first-team opportunities. (Daily Mirror)

The mystery over Diego Costa's condition has deepened after it emerged the Chelsea striker was forced to spend time in hospital after returning from international duty with Spain. (Daily Telegraph)

Chelsea striker Didier Drogba says the current side are as good as the team who won the Premier League title in 2004-05. (Independent)

Blues manager Jose Mourinho has identified Cesc Fabregas as the player to succeed John Terry as the club's next captain. (Daily Express)

The cost of renovating the Olympic Stadium before West Ham's 2016 move will rise by £35.9m but the extra funding will not be paid for by either the Hammers or the taxpayer. (Daily Mail)

Manchester City will ask Uefa to reimburse their fans who lost money when they were not allowed to attend Tuesday's match with CSKA Moscow. (The Guardian)

Celtic manager Ronny Deila has come out in support of his players' off-field behaviour after goalkeeper Lukasz Zaluska was allegedly attacked during a night out in Glasgow. (Daily Record)

Tony Pulis says he would have been interested in the Cardiff City manager's job had he been approached but has thrown his backing behind new boss Russell Slade. (Western Mail)

Gary Rowett has admitted to being "flattered" by an approach from Birmingham City to be the Championship club's new manager and says he is likely to accept the job if he impresses at interview. (The Times, subscription only)

Norwich striker Cameron Jerome had to be stopped from storming into the Leeds dressing room after accusing Giuseppe Bellusci of racially abusing him on Tuesday night. (Daily Star)

Pablo Zabaleta says his Manchester City side do not deserve to go through to the Champions League knockout stage after they were held to a draw by CSKA Moscow. (Daily Mirror)

Marina Granovskaia established herself as the most powerful woman in football by taking control of Chelsea's football operations after the departure of chief executive Ron Gourlay. (Times, subscription only) 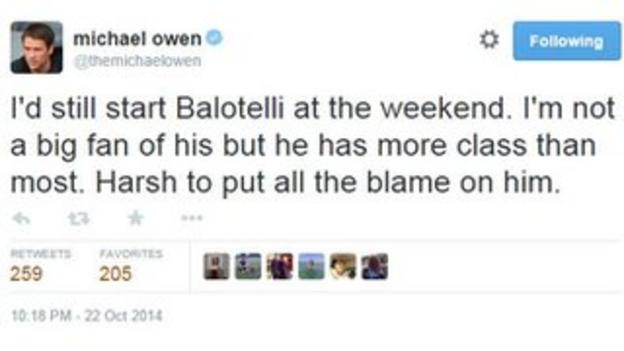 After goals from Kieran Gibbs and Lukas Podolski gave Arsenal a last-gasp victory over Anderlecht, midfielder Aaron Ramsey tweeted: "What a finish to the game! Good to get back to winning ways. Happy to get 90 under my belt. Buzzing for Gibbo and Poldi, great finishes!"

A dad in Manchester is auctioning his baby son's future football allegiance on eBay - and the winning bidder gets to choose whether he supports City or United. (Manchester Evening News)