Manchester United could bring former Arsenal and Chelsea left-back Ashley Cole back to the Premier League from Roma. The 33-year-old is keen on a return to England and would give teenager Luke Shaw competition in the United defence. (Daily Express)

Gareth Bale could be available to Manchester United for £90m as Real Madrid team-mate Isco's impressive recent form has edged the 25-year-old Welshman out of the first XI. United attempted to buy Bale when the attacker left Tottenham for the Bernabeu in a record £85m move in 2013. (Daily Star)

Tottenham head coach Mauricio Pochettino expects Harry Kane to have a long future at White Hart Lane, despite rumours linking the 21-year-old with a move away from the club. (London Evening Standard)

Aston Villa are considering making an offer to local rivals Wolves for winger Bakary Sako. The 26-year-old Mali international has scored seven goals for the Championship side this season, while Villa have managed only four in nine Premier League games. (Daily Mirror)

Arsenal have stolen a march on Bayern Munich in the race to sign 17-year-old Benfica midfielder Goncalo Guedes, who is also being tracked by AC Milan and Borussia Dortmund. (Daily Express)

The Gunners are also interested in Sevilla and Poland midfielder Grzegorz Krychowiak, 24, who has a buy-out clause of £24m. (Sun - subscription required)

Chelsea manager Jose Mourinho is a translator with an over-inflated opinion of himself, according to former France coach Raymond Domenech. (Daily Telegraph)

Hull manager Steve Bruce has been linked with the vacant managerial role at Championship side Fulham. (Daily Mirror)

The odds on Bruce to be the next Premier League manager to leave his job have moved from 66-1 to 6-1 in recent days. (Racing Post) 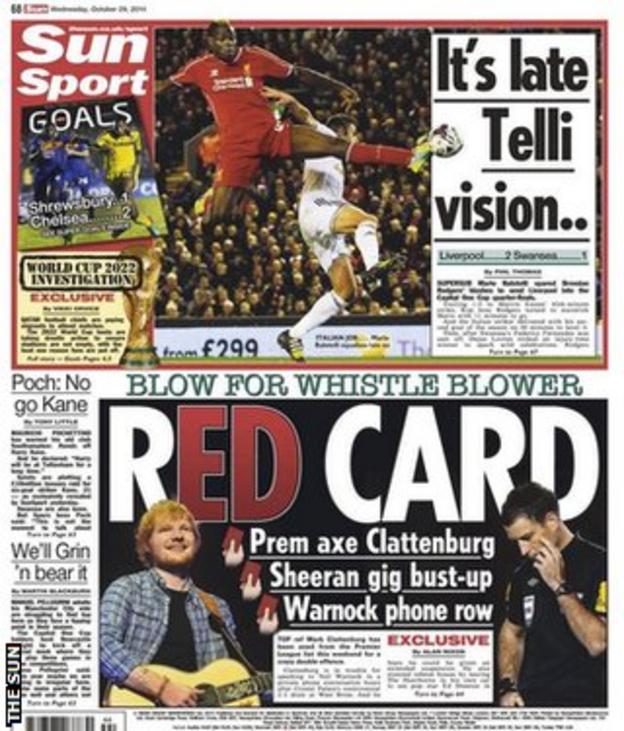 Hull defender Alex Bruce, 30, says he has "a thick skin" at taunts that he only got the chance to play in the Premier League because of his father. (Hull Daily Mail)

Adel Taarabt was left out of QPR Under-21s fixture against Swansea. The 25-year-old midfielder has been involved in a public row with Harry Redknapp over his fitness but was scheduled to play in the match at the club's Harlington training ground in west London. (Daily Express)

The average yearly wage of a League Two manager is £50,000, compared with the £3m for a Premier League boss. (Daily Mail)

Sheffield United manager Nigel Clough says he wants to be drawn against Chelsea or former club Liverpool in the Capital One Cup quarter-finals. (Sheffield Star)

Tottenham manager Mauricio Pochettino says his side are struggling at home because the White Hart Lane pitch is "a little bit tight". (Guardian)

Manchester United goalkeeper Anders Lindegaard took to Twitter to poke fun at reports he did not join his team-mates in watching Real Madrid's match against Barcelona on Saturday.

Arsenal forward Lukas Podolski, 29, is set to make his acting debut with a role in German comedy Macho Man. (Metro)

A Uruguayan newspaper has claimed that Luis Suarez's Barcelona team-mates did not help him on his debut against Real Madrid. El Observador noted that Lionel Messi did not pass to the former Liverpool striker at any stage during the 3-1 defeat.(Daily Star)

Stoke City have told defender Ryan Shawcross, 27, not to man-mark at set-pieces as they fear he is being targeted by referees for his "grappling".(Daily Mail)

Al Ahly midfielder Walid Soliman has been banned for four months by the Egyptian FA for untucking a referee's shirt after being booked. (Fox Soccer)

Harry Redknapp could have signed Charlie Austin six years ago for free. Austin's grandfather Ozzy has been a friend of the QPR manager for 20 years and recommended that Redknapp sign the striker for Tottenham in 2008.(Daily Telegraph)