Manchester City would be keen to move for Liverpool captain Steven Gerrard, 34, if the midfielder fails to sign a new deal at Anfield. (Mail on Sunday)

Liverpool are ready to outbid Arsenal in the race to sign Barcelona winger Pedro, 27, in the January transfer window.(Metro)

Heerenveen midfielder Daley Sinkgraven, 19, has dealt a blow to Manchester United's hopes of signing him after revealing he would prefer to remain in his native country, with Ajax a possible destination. (IB Times)

Newcastle are trying to beat Celtic to the signing of 29-year-old midfielder Lassana Diarra, who is a free agent after leaving Lokomotiv Moscow. (Sunday People)

Newcastle midfielder Cheick Tiote, 28, could be in line for a £12m January move to Rafa Benitez's Napoli. (The Sun on Sunday - subscription required)

Liverpool manager Brendan Rodgers has pleaded with skipper Steven Gerrard, 34, to extend his contract at Anfield. (The Sun on Sunday - subscription required)

And Rodgers has criticised the decision to exclude former Liverpool striker Luis Suarez from the Ballon D'Or shortlist. (Sunday Express) 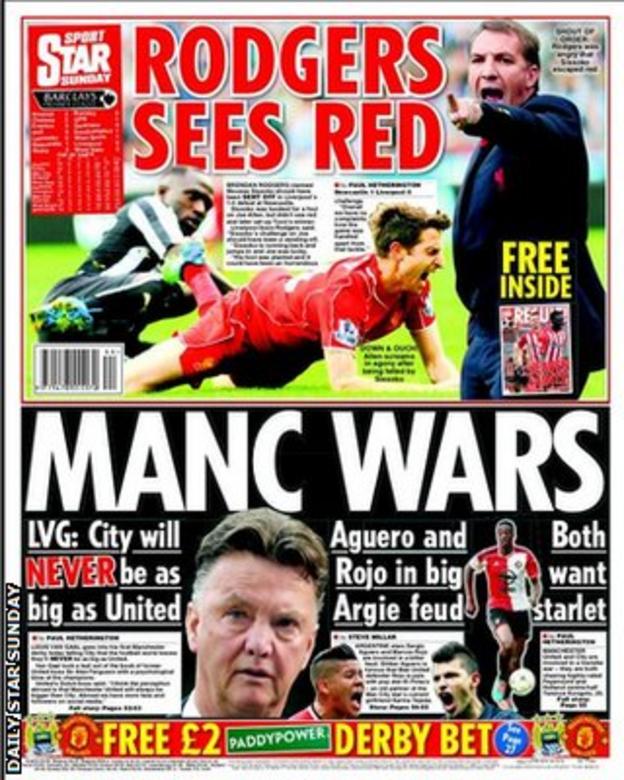 Professional Footballers' Association research has shown that those from Black, Asian and ethnic minorities (BAME) backgrounds are being excluded from backroom roles in football. (Observer)

Southampton manager Ronald Koeman admits he is "surprised" at how well the second-placed club's new signings have adapted to the Premier League. (Sky Sports)

Manchester City striker Alvaro Negredo, 29, currently on loan at Valencia, has hit out at his treatment by manager Manuel Pellegrini. (Manchester Evening News)

Liverpool manager Brendan Rodgers has laughed off claims by West Ham boss Sam Allardyce that he is too set in his ways.(Liverpool Echo)

Joey Barton was unable to get a ticket to watch his club QPR take on Chelsea, but ended up enjoying his second-choice match of Brentford v Derby, which he described on Twitter as "a terrific game of football".

Peter Crouch's wife Abbey Clancy shared a picture of the lanky Stoke striker dressed up as a skeleton for Halloween.