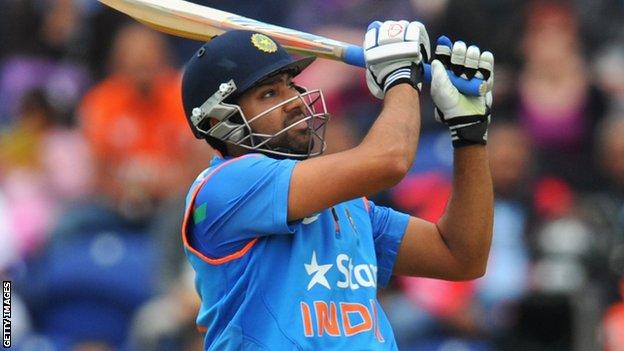 After Rohit Sharma's 264 for India against Sri Lanka broke the world record for an innings in a one-day international, we wanted to find out your favourite sporting record breakers.

To put Sharma's monumental knock into perspective, his score is 18 runs more than the average total posted by teams batting first in one-day internationals this decade.

So we asked you to tell us which other world records stand out in sporting history.

What were the matches, moments and individual performances that you recalled as #greatsportingrecords?

A first-round meeting between the American number 23 seed John Isner and the French qualifier Nicolas Mahut was not high on the wish lists of many of the Wimbledon crowd on a Tuesday afternoon in June 2010.

But after 183 games, more than 100 aces and 11 hours of playing time, a mass of spectators flocked to court 18 to watch Isner close out the final set 70-68 on the Thursday evening.

It wasn't all bad for Mahut, though. Both players were presented with a crystal bowl and crystal champagne flutes by the All England Club to mark the longest tennis match in history.

Few people suspected Arsenal would lose their final game of the 2003-04 campaign, even when Paul Dickov gave Leicester a half-time lead at Highbury.

The Gunners had gone 37 games unbeaten through the season, and the inevitable second-half turnaround thanks to goals from Thierry Henry and Patrick Vieira eventually saw Arsenal over the line to become 'Invincibles' - the first team since Preston North End in 1889 to go a full league campaign without losing.

Their run continued into the following season, but Arsene Wenger's side's eventually came unstuck at Old Trafford, 49 games after their last defeat.

Michael Phelps's four gold medals in the Aquatics Centre at London 2012 took him to 18 golds for his career - double the number held by any other individual.

At his first Olympics in Athens in 2004, the American won six golds and two bronze medals. Since then he has gone on to dominate men's individual competition in the pool, winning 22 medals in all.

At the 2008 Games in Beijing, Phelps's eight-gold haul was the most won in a single Olympics by one athlete - just one of the number of records held by this supreme swimmer. His recent decision to revoke his retirement will strike fear into 2016 medal hopefuls.

While Sharma drew the plaudits for his one-day slog to 264 on Thursday, his innings is dwarfed by Brian Lara's Test record of 400 not out for the West Indies in 2004.

It was just two hours into day three of the Windies' Test against England in Antigua when Lara drew his knock to a close by declaring with the home side at 751-5.

And it was certainly no fluke from Lara, who had broken the record 10 years earlier with a 375 against England. He also holds the record for the highest first-class innings - a 501 not out for Warwickshire against Durham in 1994.

Miroslav Klose has been Mr Consistent in the last four World Cup campaigns, with his Germany side top scorers at the last three tournaments.

But in their 7-1 demolition of Brazil in July, Klose set his own individual record, with his 16th goal moving him to the top of the all-time World Cup scoring charts.

And you can see Klose's record-breaking haul for yourself - all of the Lazio player's strikes are on the BBC Sport website.

Wilkinson's left foot, and right foot for that matter, have been the difference for England on many occasions in Rugby World Cups.

It was, of course, instrumental in helping England win the tournament in 2003.

The now retired fly-half unsurprisingly holds the record for the most points (277), drop goals (14) and penalties (58) scored in Rugby World Cup tournaments, and he recently proved he can deliver team talks in two languages, as well as kick points off both feet.

In the words of Steve Cram, at London 2012 the champion became a legend when Usain Bolt proved he is the fastest man on earth.

In September, Bolt declared he can shave even more time off his records.