Arsenal want to sign Polish defensive midfielder Grzegorz Krychowiak from Spanish side Sevilla, although the 24-year-old could cost as much as £20m. (Daily Mirror)

Chelsea and Manchester United are ready to bid for Galatasaray midfielder Wesley Sneijder, 30, after the Netherlands international's agent suggested he was unhappy at not playing in recent matches for the Turkish side. (Daily Express)

Bayern Munich and Switzerland midfielder Xherdan Shaqiri, 23, a former transfer target for Liverpool, will be allowed to leave the German champions in January. (Daily Mail)

Everton striker Arouna Kone, 31, could be sent out on loan in the January transfer window as he aims to regain full fitness after a year out of action with a knee injury. (Talksport)

Liverpool and Manchester United are both interested in buying Netherlands Under-21 international Daley Sinkgraven. The 19-year-old, who can play as an attacking midfielder or winger, is currently with Dutch side Heerenveen. (Daily Star)

Celtic hope to sign Manchester City striker John Guidetti on a permanent deal in January. The 22-year-old is currently on a season-long loan at Celtic Park.(Talksport)

Fifa denies reports that major sponsors Sony and Emirates dropped their contracts because of allegations of corruption. (Guardian)

Forward Didier Drogba, 36, claims the current Chelsea side are the most dangerous attacking team he has been a part of. (The Times, subscription required)

Striker Darren Bent, 30, says his decision to join Championship strugglers Brighton on loan from Aston Villa is not motivated by money. (Sunderland Echo)

Everton manager Roberto Martinez says midfielder Ross Barkley, 20, is not a diver and claims the incident in which he went to ground against West Ham "has been blown out of proportion". (Guardian)

Bayern Munich's French midfielder Franck Ribery, 31, says the Ballon d'Or award for the world footballer of the year is "no longer for the best player. It's all about politics". (Marca)

Sporting Lisbon midfielder Nani, 28, says he has got his confidence back since joining on a season-long loan from Manchester United. (Manchester Evening News) 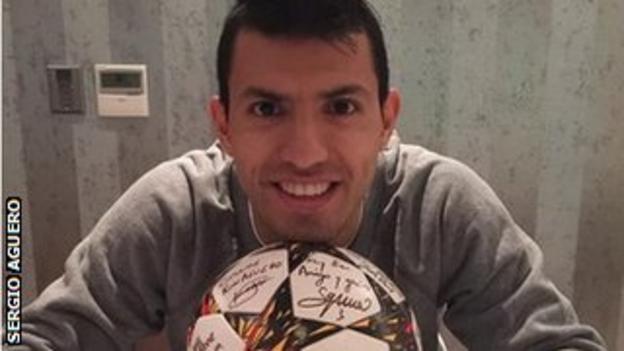 Manchester City striker Sergio Aguero posts a picture on Twitter of the signed matchball after his Champions League hat-trick against Bayern Munich on Tuesday.

Manchester City midfielder Yaya Toure congratulates Formula 1 world champion Lewis Hamilton by posting a picture on Twitter of him wearing a Lewis Hamilton T-shirt, along with the message: "Another well deserved title for our champion. Congratulations!"

Chelsea full-back Filipe Luis, who is among the nominations to be in the Fifa FifPro Team of the Year, writes on Twitter: "I'm very honoured to be named in the top 20 of world defenders."

Manchester City striker Sergio Aguero, 26, could have signed for Bayern Munich back in 2006 but the German club decided the player was too lazy. (Daily Mail)

Real Madrid have removed the cross from their club crest as part of a lucrative three-year deal with the National Bank of Abu Dhabi. The Spanish club feared the old design would offend Muslims. (Daily Telegraph)

Paris St-Germain striker Zlatan Ibrahimovic, 33, picked himself up front after being asked to name his dream team. (Metro)