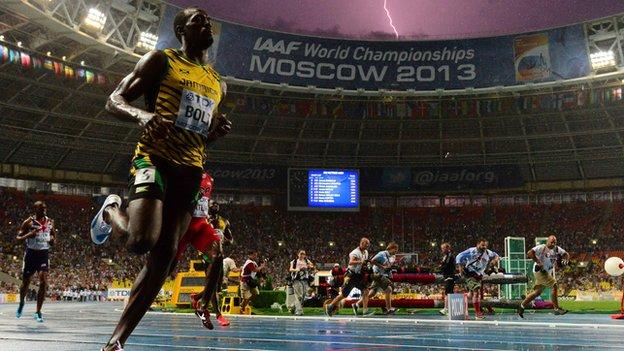 The International Association of Athletics Federations might have broken Eugene's heart and bemused Barcelona by deciding Doha's late £23.5m "incentive" had given it the edge in the contest to stage the 2019 World Athletics Championships, but it did the rest of us a great service.

Because by giving the Qatari capital the chance to stage a week of running, jumping and throwing, the governing body had to let them do it away from the blast furnace that is the Gulf state's summer.

Suddenly it all makes sense. The IAAF's 27 voters were not influenced by Qatar's offer to cough up the prize money, bring in an as yet unnamed new sponsor and build 10 tracks at deserving locations. They just wanted to settle, once and for all, who gets sport's bronze medal in the mega-event stakes.

Which they will do, just as soon as they work out a way to go head-to-head with the Asian Games, the Champions League, the European Football Championship, the Paralympics, the Ryder Cup, the Super Bowl and every other event that has claimed to be third only in size, significance or some mix of the two, to the Summer Olympics and World Cup.

"The best other events can hope to be is 'third biggest' and this provides a considerable unique selling point when it comes to maximising commercial rights.

"By claiming to be the third biggest, promoters position themselves above all other events and create the illusion they are in the same league as the big two. This is very seductive for would-be commercial partners and public-sector bodies."

Or, as the man who brought the Tour de France to Yorkshire, put it: "Saying you're the 11th biggest event in the world just lacks 'wow'."

And that was not a message Gary Verity could take to the region's local authorities when he passed the metaphorical cloth cap around for contributions to the Grand Depart's £27m budget.

"What got the councils excited was that it is cycling's biggest event, it is unique, relatively cheap and it was outrageously ambitious," said the man who has spent the last five months collecting awards for pulling it off.

Verity got his money, eventually, because he was able to look councillors in Harrogate, Holmfirth and Huddersfield in the eye and say this French bike race is the biggest event Yorkshire can ever hope to stage.

The Rugby World Cup's pitch is based on a combination of the number of participating nations, its television audience and the number of tickets it sells.

If you take those individually, it barely makes the top 10 for participants or ratings. Only for paid-up spectators will the 2015 RWC get near the medals, with its projected 2.3m tickets sold close to the London Paralympics' 2.7m.

"It is the third biggest global event of an international flavour," clarified World Rugby chief executive Brett Gosper in London last month, ranking it behind a "combined Olympics" and football's World Cup.

"It's a big one, alright, and it's getting bigger."

His answer, however, revealed how complicated this third biggest business is: how do you define big? And what is an event?

For Gosper, the Rugby World Cup is the culmination of a series of qualifying events over four years. So his count includes the 102 countries that entered qualification for the 2015 tournament.

But does that mean football's Champions League final should be viewed as the last act in a 10-month play? Is the Super Bowl the last day of a single five-month event that dominates US conversation like nothing outside of a presidential election?

"The problem we have is that we are comparing apples, oranges, pears and coconuts," explained Mike Laflin, the chief executive of the sports business analysis firm Sportcal.

"All the measurements are made by the relevant sports bodies themselves, so there is no uniformity.

"You end up with a lot of rhetoric about an event's economic impact, but most of us don't believe the numbers so there is also a lack of credibility."

Nowhere is that credibility more stretched than in the fantasy world of TV figures.

Let us take the Rugby World Cup's claim of a cumulative global TV audience of 4.2bn as an example.

Asked to explain how a sport with patchy global appeal can generate such huge audiences, World Rugby's Alan Gilpin, who heads up organisation of the World Cup, said more than 20,000 hours would be broadcast from next year's tournament to 200 countries, including, for the first time, Greenland (population 56,483).

When pushed for more detail on this, Gilpin said, whilst fighting a smile: "It is based on the number of segments people watch, and that is the same metric everybody else uses."

A segment, in case you are wondering, is somebody watching for 20 minutes, so it is possible that 25m people could deliver an audience of 100m. That still seems far-fetched for Tonga versus Georgia.

But Gilpin is right: everybody is at it. The last big football tournament in this country, Euro 96, claimed an audience of 6.7bn, the Tour de France talks about its 3.5bn viewers and some of the more excitable Chinese sources suggested as many as 4bn watched the opening ceremony of the 2008 Olympics in Beijing.

"We need an agreed framework of what is meant by TV audiences and to apply it consistently," said Sheffield Hallam's Shibli.

"There has been a lot of bravado in the battle to be the world's third biggest sports event, and TV audiences have been stretched to the point of being ludicrous.

"We now routinely get estimates of how many households a broadcast can reach, rather than how many people actually watched it. Other tenuous inclusions feature coverage on news programmes and in-flight entertainment on aeroplanes!"

You could argue there is no harm done if everybody is doing it, but Sportcal's Laflin thinks harm is being done to sport's inherent value.

"We need a better way to sell these events than just these figures that nobody really believes," he explained.

"These events are actually undervalued because sport doesn't understand its product very well.

"We should focus more on the social benefits, national pride, volunteers, that kind of thing. The 2011 Rugby World Cup had huge intangible benefits for New Zealand.

"Ask London or Vancouver if they would have the Olympics back - of course they would!"

More than 200 experts were asked to come up with a list of the most important factors in ranking an event - tickets sold, tourists attracted, media impact and so on - and these were applied to 700 events over a 12-year period.

The results are fascinating, as the 2011 Rugby World Cup is ranked fourth, behind London's Olympics, the 2014 World Cup in Brazil and 2012 Paralympics. So Gosper was on to something.

The IAAF will be less happy, though, as the 2013 Worlds in Moscow are down in 11th, sandwiched between this year's Asian Games in South Korea and the Youth Olympic Games in China.

While it is fun to puncture a few puffed-up claims, there is a serious point.

With western democracies increasingly reluctant to put up the cash required to win bids for big sporting events, there is a danger they will give up, leaving the field clear for politicians from countries where they are less worried about things like elections.

Clearly, there are benefits for sport in dealing with nations that can stage events without too many questions, particularly if they happen to be wealthy, but nobody wants these bidding contests to become walkovers.

It is something Simon Morton spends a long time pondering. As the boss of the team at UK Sport that uses National Lottery money to bid for world-class events, Morton needs to know where the value is.

"The global market for sports events is quite immature, which can be a bad thing in that there are some real turkeys out there, but also an opportunity because you can pick up some bargains," said Morton, who has secured 10 world or European-level events between now and the Rio Olympics in 2016.

"But we don't talk about size so much, we talk about strategic value to the UK, and on that basis we are delighted to have won the bid to stage the World Athletics Championships in 2017.

"This concept of biggest can be misleading. We look for public engagement, how it will benefit our elite performers and what the event's legacy will be. They are things we can measure."

So perhaps size is not important, after all, and what really matters is not how big your event is, but what you do with it.

That said, it can only be a matter of time before people start arguing about which event has the third best legacy.