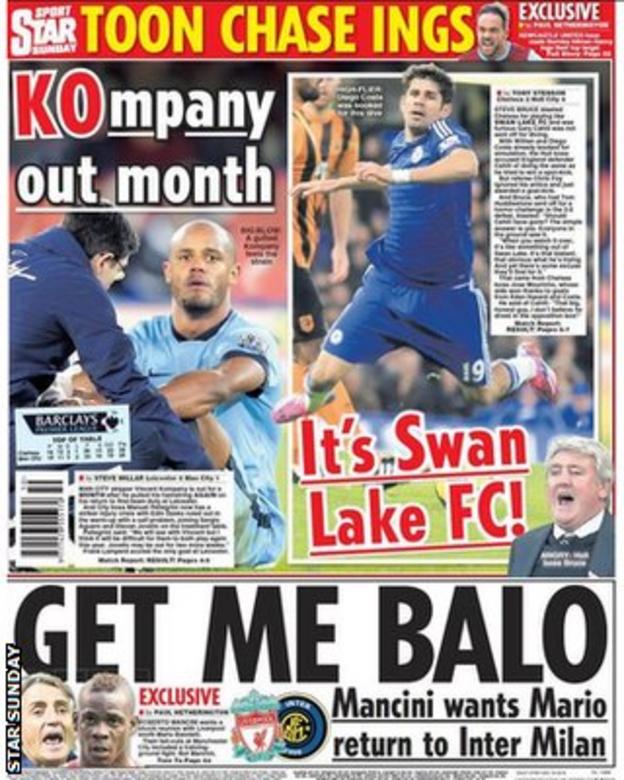 Liverpool's Italian striker Mario Balotelli, 24, could be heading back to Serie A with Inter Milan boss Roberto Mancini eager to secure his return to the San Siro. (Daily Star Sunday)

Colombia international Fredy Guarin, 28, could be going in the other direction with Liverpool considering a January loan deal for the Inter midfielder. (Sunday People)

Chelsea have made a £30m bid for Roma midfielder Kevin Strootman, 24, in an attempt to beat Manchester United to the signing of the Netherlands international in January. (Sunday Express)

But United are set to pip neighbours Manchester City to the signature of Fiorentina's Colombian midfielder Juan Cuadrado, 26, next month. (Sport Mediaset - in Italian)

Burnley striker Danny Ings, 22, who is set to be a free agent next summer, is attracting interest from Dutch champions Ajax. (Sunday People)

Ings is also a target for a number of Premier League clubs, with Newcastle United leading the top-flight chase for the forward. (Daily Star Sunday)

Newcastle United's 27-year-old French winger Hatem Ben Arfa, who is on loan at Hull City, has held talks about terminating his contract in January and is currently back in France. (L'Equipe - in French)

Manchester City and New York City FC are set to agree to extend the loan of 36-year-old Frank Lampard at the Etihad from the end of December until the end of March. (Sunday Mirror)

Swansea City's Spanish forward Michu, 28, who is on loan at Napoli, could be set to return to the Premier League with Crystal Palace. (Mail on Sunday) 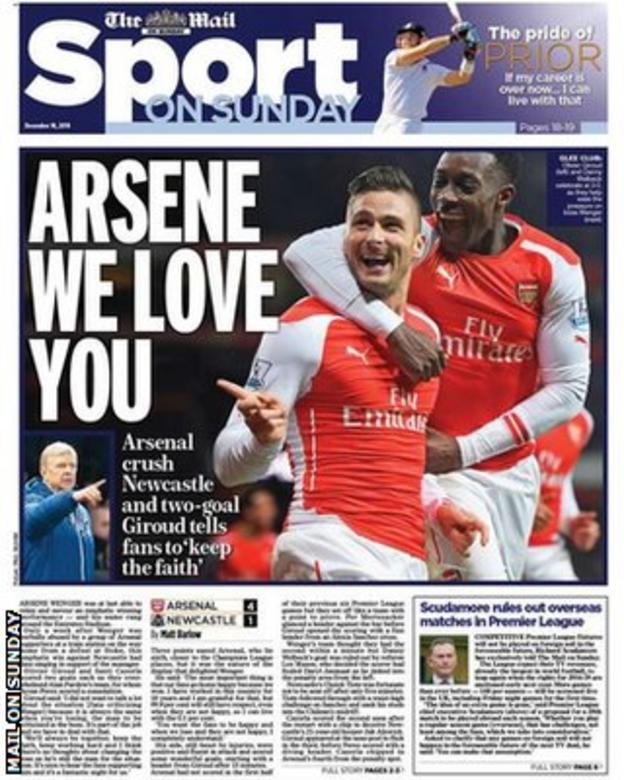 Liverpool captain Gerrard and defender Dejan Lovren, 25, were involved in a row after last month's game against Crystal Palace with both players blaming the other for the 3-1 defeat. (Sun on Sunday - subscription required)

Meanwhile, Arsenal midfielder Mesut Ozil, who has been sidelined since October with a knee injury, could be back sooner than expected after the 26-year-old Germany international was pictured going to training. (Mail on Sunday)

Meanwhile, Dutchman Van Gaal says only a lack of alternatives saved compatriot Robin van Persie, 31, from being dropped when the striker's form dipped earlier in the season. (Observer)

Arsenal's Chilean forward Alexis Sanchez, 25, set up two goals in Saturday's 4-1 win over Newcastle and celebrated by tweeting a picture from inside the Emirates' dressing room of him and his team-mates getting ready for the club's Christmas party.

West Brom's hard-fought derby win against Aston Villa literally left its mark on at least one Baggies player, with goalkeeper Ben Foster tweeting an image of a team-mate's foot with a huge lump on it and the hashtag #clawfeet.

Meanwhile, Baggies midfielder Craig Gardner, 28, netted the winner against former employers Villa, then the ex-Birmingham City player further twisted the knife when he tweeted: "Heard the Blues were singing my name today, that puts the icing on the cake #kro"

Roma's Ivory Coast forward Gervinho, 27, tweeted he was misquoted in reports suggesting that he "hated" former club Arsenal and posted the correct quotes stating his "love" for the Gunners, before adding: "Some media really need to hire someone to do the translations properly."

Bayern Munich's Germany midfielder Bastian Schweinsteiger, 30, left team-mate Rafinha, 29, red faced when he pretended to high-five the Brazilian before leaving him hanging in front of 30,000 fans in Augsburg. (Metro)