Roma's former England defender Ashley Cole, 33, has dismissed reports linking him with a return to the Premier League with Crystal Palace.(Daily Express)

But Palace manager Neil Warnock has confirmed his interest in signing Cole.(Daily Star)

Manchester City and England midfielder James Milner's future at Etihad Stadium is in doubt as he stalls on a new contract. (Daily Telegraph)

Chelsea forward Eden Hazard, 23, is close to finalising a new £200,000-a-week deal which would make him the club's highest-paid player. (Daily Telegraph) 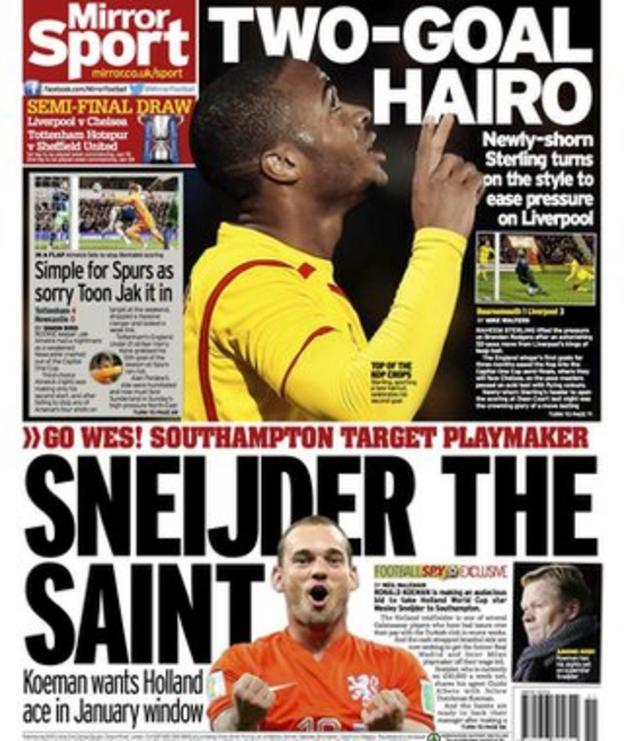 Chelsea goalkeeper Petr Cech, 32, claims the current team could become the best in the club's history.(Mirror)

Yeovil Town midfielder Simon Gillett, 29, says money will count for nothing when his side face Manchester United in the FA Cup third round.(Daily Mail)

Chelsea manager Jose Mourinho has no plans to bolster his squad during the January transfer window. (Talksport)

Sunderland manager Gus Poyet has warned of "panic and heart attacks" at the club unless owner Ellis Short funds the purchase of "quality players" in January. (Daily Mirror)

Former Tottenham boss Andre Villas-Boas says "promises were not kept" during his time at White Hart Lane, resulting in the club signing players who "did not fit the profile" he wanted.(London's Evening Standard)

"It was an honour to have played with you @ThierryHenry," tweeted former Arsenal team-mate Robin van Persie following the Frenchman's retirement. "Thanks for all you have given to football. What you have achieved will live on for many years. A true football man, a Legend!"