Manchester United will have to offer goalkeeper David De Gea, 24, as part of any deal in their attempts to sign 25-year-old forward Gareth Bale from Real Madrid. (Sunday Mirror)

Liverpool are ready to test Aston Villa's resolve by trying to sign midfielder Fabian Delph, 25, and centre-back Ron Vlaar, 29, in a £15m deal, with both players out of contract next summer. (Star on Sunday)

Chelsea are ahead of Arsenal and Manchester United in the chase for Corinthians forward Malcolm Silva, 17. (Sunday Express)

Gunners midfielder Tomas Rosicky is wanted by Olympiakos, with the Greek side hoping to get the 34-year-old for £2m in January.(Sun on Sunday - subscription required)

Hammers co-owner David Sullivan claims he signed striker Diafra Sakho, 25, for the club last summer and not manager Sam Allardyce, who is set to face a battle to hold on to centre-back James Tomkins with Newcastle interested in the 25-year-old. (Sunday Times - subscription required)

However, former Tottenham manager Tim Sherwood is the favourite to take over as Palace boss. (Sunday Times - subscription required)

Alan Irvine could become the second Premier League manager to lose his job in a matter of days if his West Bromwich Albion side lose badly at Stoke City on Sunday. (Sunday Telegraph)

Manchester United midfielder Michael Carrick, 33, is in line for a contract extension at Old Trafford when his current deal runs out in the summer. (Mail on Sunday)

Swansea City striker Wilfried Bony, 26, reveals he had a failed trial at Liverpool as he prepares to face the Reds at Anfield. (Wales Online) 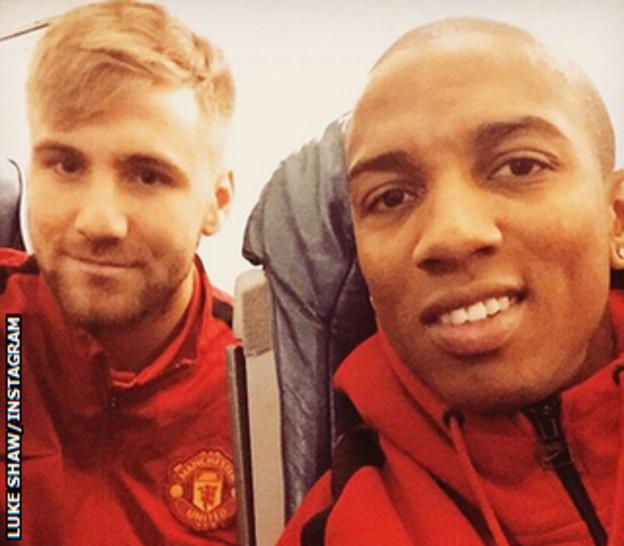 Manchester United full-back Luke Shaw has been injured for more than a month, but travelled with the squad to play Tottenham on Sunday - as he showed with this picture he posted on Instagram. 'Just landed in London with @youngy_18 hoping for the 3 points tomorrow!', the 19-year-old England international wrote.

There are plenty of critics of the Premier League's festive football schedule, but Stoke City striker Peter Crouch is not one of them. He tweeted: "I love the festive period." And when asked about the number of games over Christmas and New Year, he replied: "Love it."

Barcelona's Brazilian star Neymar, 22, almost let his generosity completely get the better of him as he was left wearing just his underwear after giving away the rest of his kit during a charity match. (Metro)